All Love Matters…Even When It Ends

When my client, who I’ll refer to as Vicky began working with me, she was trying to determine if there was any hope for her marriage that had been on the ropes for years. They were separated and ready to file papers, but she was still holding on and wasn’t sure why.One week later, her husband told her that from his perspective, he was done and the marriage was over. As you can imagine, the finality of that sent her reeling…thinking she had just wasted the last twenty years with a man who didn’t love her anymore. After the shock wore off (literally only a few days later), she was able to access that deeper wisdom within that told her it was not a waste of the last 20 years:

They had two amazing boys together and being a Mom has forever changed her.

She’s not the same woman she was when they married. She’s no longer the scared young woman in need of encouragement, but now a woman with a Doctorate degree and a career. He helped her step into that, but what she needs now in a relationship is something that he simply cannot be.
The hurt and the pain she felt inside this marriage, particularly after finding out about his very public, year-long affair made her grow – literally forced her into becoming stronger and knowing her value or being swallowed whole by the enormity of it.

All love matters, even when it ends.

It matters because it existed.There’s something in the Chaos Theory known as The Butterfly Effect. This theory is based in fractal mathematics and shows how the simple act of a butterfly flapping its wings in New Mexico can create a hurricane in China. The idea is that even small actions lead to drastic changes in the environment. The same holds true in our lives and certainly in our relationships. The effect of this relationship will be felt and experienced in subtle (and not so subtle ways) for the rest of your days. It will also have an impact of your children, your families and those around you that you don’t even realize are watching and learning and adjusting their own choices based upon what they’re seeing, therefore impacting their connections and their experiences.Just because a marriage doesn’t last forever does not mean it was a waste of time.Just because he cannot be who you need at age 40 (like he was for you at age 20) does not mean there’s anything wrong with either of you.Just because your marriage may end does NOT mean that it has no value. That relationship – no matter how long it was and no matter how much pain was caused – helped you evolve into the woman you are today. You are forever changed because of this relationship.You get to decide if that change is to your benefit or to your disadvantage…And how you choose to think about it will determine your future. Choose intentionally. 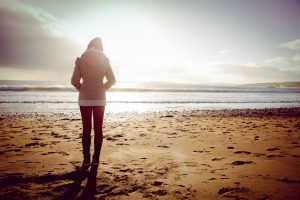