What’s Creating the Arguing or the Distance in Relationships?

“The way I see it, our natural human instinct is to fight or flee that which we perceive to be dangerous. Although this mechanism evolved to protect us, it serves as the single greatest limiting process to our growth.” Charles F. Glassman

Some couples argue when they’re not getting along, allowing anger to take over. Some create more distance in relationships to avoid dealing with the problems that exist. There’s actually a biological reason why this is happening.

There is a part of each of our brains – scientists refer to it as the reptilian brain – where the fight-or-flight instinct lives. When we feel like we’re in danger, that instinct kicks in and our reaction to either fight back or run away takes over.

That would seem to be super-helpful when we’re in genuine danger of being physically hurt, for instance when someone puts a gun to our heads or a bear begins to chase us in the forest.

Instead where that instinct gets used these days is when our brains think we’re in physical danger, but it’s actually emotional danger:

For obvious reasons we don’t want to feel the negative emotions of shame, failure, loneliness, unworthiness, or despair in our most important and most intimate relationship. Our brains interpret that stress or anxiety we’re feeling as being in danger and the fight or flight response kicks-in, causing us to either:

One scenario leads to endless fights and frustrations.

The other leads to withdrawal and disconnection.

When there’s either arguing or distance in relationships, it very likely could be the brain’s natural reaction to stress, anxiety and fear.

And when we solve what’s causing the stress, anxiety and fear…

When we can stop running from negative emotions…

THAT’s when we can solve the problems and create lasting change within the relationship. 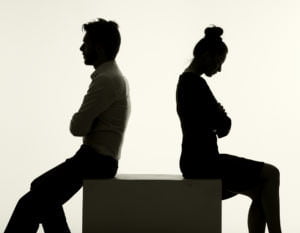