“The hardest of all is learning to be a well of affection, and not a fountain; to show them that we love them not when we feel like it, but when they do.” Nan Fairbrother

“I can sit next to him, but I cannot lean on him or put my head on his shoulder. I can hold his hand, but he will drop within about five minutes. We haven’t had sex for a year and he hasn’t kissed me in months. Every time I try to initiate some physical closeness, he has a reason why now is not the right time. I feel lost, confused, scared and lonely as hell.”

This is one woman’s story, but it’s also the story of thousands of women.

We’ve been taught that men traditionally want sex more than women. But as women grow older and the children grow up, there’s more energy and space for themselves and their desires in their own lives. And closeness, connection, affection, intimacy and sex with a loving partner is a part of that desire.

So, what happens when we find ourselves begging for affection:

Feeling Rejected: Being rejected over and over and over again slowly chips away at your soul. Think about a woodpecker chipping away at a tree in the same spot over the course of years. Each moment he’s chipping away seems insignificant. But at some point it all adds up and becomes catastrophic, taking the tree to the ground. That’s what it’s like to be continually rejected over the course of months or years. We tell ourselves it’s okay in the moment, but the sustained damage that’s being done is far from okay.

Sometimes, we just live an empty, numb, lonely life attempting to be okay without having what our hearts are longing for…

If you find yourself begging for affection in what should be your closest, most intimate relationship – you have to pay attention to that in the subtle stages before it becomes something catastrophic. It may simply mean that you and your partner are not a good match in this regard.

I once had someone tell me that they don’t need sex and neither does their partner and that totally works for them. They are able to achieve closeness in many other ways and they actively do that to nurture the relationship.

If you and your partner have a low sex drive and that works for you…great.

If you and your partner have a higher sex drive and that works for you…great.

But if you are polar opposites where one of you desires affection, closeness, connection and your partner not only doesn’t need that, but doesn’t want that and avoids it…then maybe you simply want very different things.

The result of which might be the choosing to walk away, which is incredibly painful and difficult.

But staying in relationship together and begging for affection, while continuing to hurt one another for decades is also painful and difficult. 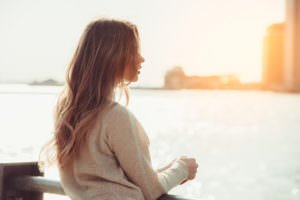