Neither Wanted to Give In… So They Both Gave Up

“Being a successful couple was learning what you were willing to compromise on, and what you weren’t; learning when to stand your ground, and when to give it up; what was truly important enough to fight over, and what was just you being pissy.” Laurell K. Hamilton

We all have them.

Each one of us carries certain beliefs about our relationships.

And they’re not called beliefs for no reason. They’re called beliefs because we genuinely believe they’re true. We believe that the way we view the world – and our relationships – is right. Otherwise, we wouldn’t believe what we believe. Make sense?

For instance, one client couple has been at a stand-still for two years. She wants to be romanced and wants more connection in her marriage. She wants him to try harder and make an effort. He, on the other hand, thinks that he shouldn’t have to work that hard in his marriage; that this is just how things are after being together for a while. He’d like her to stop wanting what she wants and just go back to the way it’s always been.

She’s become tired of being the one who’s always trying; so she’s stopped trying. He’s holding fast to not making the extra effort.

Neither wanted to give up their beliefs that each was right.

So, guess what happened?

Nothing ever changed and their relationship never got better. As a matter of fact, the relationship actually worsened over time as they  held onto their beliefs and essentially both gave up.

It happens all the time in many ways:

One side thinks we should have stricter gun laws. One doesn’t. Guess what happens? Nothing.

One side thinks their sick friend should give up sugar. The friend doesn’t want to and doesn’t think it will help. Guess what happens? Nothing.

One side thinks a long-term, committed relationship can feel close and connected and even, romantic. The other doesn’t think that’s possible. Guess what happens? Nothing.

We have all done this in a number of ways throughout our lives. We held onto a belief that we thought was true. We wanted others to see our perspective and react accordingly. When that didn’t happen, we dug-in and held strong to what we believed. Neither side wanted to give in so they both gave up on the possibility of creating a relationship that felt good for both people.

And eventually the relationship crumbled.

Is this how you want it to end? By giving up? 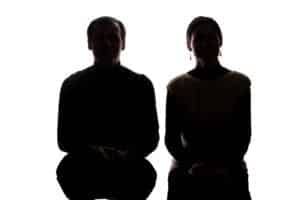