“We have contingency plans for war, but none for peace.” Theodore C. Sorensen

I’d like to offer a relationship story that is purely hypothetical…wink;) wink;)

A client that I’ll refer to as Melody has been married for 19 years to her husband Mark. She has been stuck in indecision about whether to stay or go for years, as the marriage felt increasingly disconnected and she was feeling increasingly abandoned and alone.

About a year ago Melody re-connected with an old flame from college, who I’ll refer to as Jonathan. Since then, the relationship between them accelerated quickly, she fell in love and has never felt more adored…or more confused.

She didn’t go out looking for an affair.

She never intended to end up in this place.

She’s not trying to hurt anyone.

Melody and Jonathan began making plans about how they could each leave their respective marriages in the next 12-18 months and be together. (They, like many people, have this odd belief that the children will somehow not be impacted emotionally once they turn 18 and have graduated high school…as though our kids lose their ability to feel emotion upon graduation.)

Melody was feeling optimistic and hopeful in her life for the first time in almost a decade.

Until she got the call from her lover, Jonathan. His wife found out about the affair, both their lives blew up in an instant, and he has now re-committed to his marriage and his family and is going to try to make his marriage work.

Melody understood, but went from hopeful and optimistic to heartbroken and in despair inside of a ten minute phone conversation. Now she’s mourning the loss of that love affair inside of her marriage and wondering what she was going to do?

And because she wasn’t committed to making it work with her husband Mark, she tried to convince herself that she could simply exist inside the marriage, unhappy, abandoned, and alone forever.

She was nursing a broken heart, while each day pretending to love her husband.

Her husband was essentially being treated as the “contingency plan.”

Now that her lover was no longer an option, she was back in her marriage as a default / consolation prize / contingency plan. Of course, her husband doesn’t realize this. He can only see that she’s sad and unhappy and he doesn’t know how to fix it. So he waits, hoping it’s a season for her and not a lifetime.

Melody’s husband, Mark, who she has been married to for almost two decades is now a contingency plan because her lover is no longer an option.

I hope I am never someone’s contingency plan, when what they really wanted and desired for themselves is no longer an option.

If you’re with me, it will only because you’re choosing me each and every single day.

If you’re only with me because you feel shackled to me…..that’s not love, that’s prison. 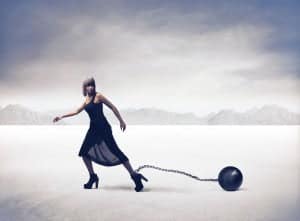