Other People Don’t Belong in Your Marriage

“Don’t let the noise of other people’s opinions drown out your inner voice.” Steve Jobs

My client, Victoria, was struggling in her marriage. She and her husband were arguing more frequently, the words becoming increasingly hurtful towards one another and she was feeling like although she loved him as the father of their children together, she didn’t like him very much lately.

She and her daughter from her first marriage many years ago went to dinner together and Victoria shared all of this (and more) with her daughter. And of course, her daughter had an opinion to share and now felt very differently about her step-father than she did before she walked into that restaurant.

In our session together, I told Victoria to begin becoming very intentional about who she shares the details of her marriage with, because when you share those private details of your marriage:

I like how Rob and Kristen Bell describe this in their book, The Zimzum of Love, “Some things shouldn’t be shared with others because such sharing diminishes the power of the exclusive circle…” between you and your partner.

Your relationship with your partner has only two pieces: You and your partner. That’s it. And the issues that arise are between the two of you, not anyone else. Within your relationship, a lot of private things get shared…hopes and dreams, fears and insecurities, desires and needs, hurts and heartaches.

I know when you share with others, you’re not trying to disrespect your relationship…

You’re trying to get an opinion from someone who’s not emotionally wrapped-up in the problem.

You’re trying to see if how you’re feeling about this problem is rational.

The Peanut Gallery Shouldn’t Get a Vote

I run a private Facebook group, called The Disconnected Marriage. Some of you may even be in it. If you are, maybe you’ve noticed something…

And in doing so, they are bringing these unknown people into the private space of their marriage where they have no business being.

If there’s a recurring problem in your marriage that you and your partner haven’t been able to resolve on your own, then seek professional help from someone who can genuinely be helpful (I’m right here…).

If you genuinely don’t know the answer to a recurring question, don’t take a poll of the peanut gallery about your life and your marriage. Instead, get quiet and still and listen for that inner guidance that’s been talking to you, while you’ve been talking to everyone else.

But think twice before randomly bringing other people – even family and close friends – into the relationship that you have with your spouse. That space between the two of you is special and should be treated as such. 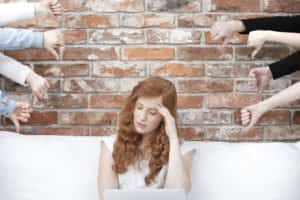