“There comes a point in every man’s life when he has to say: “Enough is enough.” Lance Armstrong

I’m sitting on my hotel balcony on the second floor. It was a warm Arizona evening and there was a wedding taking place at the end of the building. I saw the bride and her father walk down the sidewalk together toward a rose garden area; she looked beautiful. I couldn’t see the wedding as it was taking place, but about 20 minutes later there was loud clapping and I saw the “happy couple” as they exited the area and were now walking toward me on the sidewalk below.

And there was a solid two feet between them.

They were not holding hands.

Her arm was not wrapped in his.

They were not joyfully looking one another in the eyes…

…while walking away from the moment when they committed their lives to one another.

Later that evening, I overheard a couple arguing and the husband said to his wife, “I don’t even know why anyone would want to talk to you.”

We don’t want to walk beside our beloveds…

Don’t want to touch our beloveds…

We don’t want to look one another in the eye.

We say hurtful things that can’t be taken back…

And we normalize this behavior, but then wonder why we’re so disconnected.

If we can’t even pretend that we like one another or enjoy one another, then what are we doing? Why are we even together? And when one partner is considering leaving, why does the other partner resist it so much?

The day we say: “Until death do us part,” is the day many people put the marriage on a shelf and begin taking our partners for granted. Because now, no matter how badly we treat each other, no one’s going anywhere (at least not without great difficulty and a ton in lawyer fees).

I’m ranting because this is something I see far, far too often. The truth is however, that the same spouse who won’t hold their beloved’s hand at a wedding, walks ten feet ahead of her and doles out personal insults will be the same one that will be surprised and hurt when she makes a decision to leave the marriage.

We need to treat each other with kindness and compassion, with love and respect.

But maybe that feels like I’m asking too much….

Walk beside one another…

Take our partner’s hand once in a while.

And if we’re not willing to do that in our marriages, then we need to understand why we’re still together and if that still makes sense. 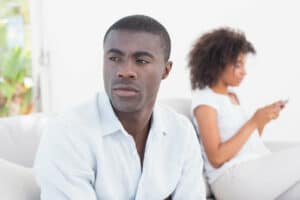