“Love enjoys knowing everything about you; desire needs mystery. Love likes to shrink the distance that exists between me and you, while desire is energized by it. Love is about having; desire is about wanting. An expression of longing, desire requires ongoing elusiveness.” Esther Perel, Mating in Captivity

It started out innocent enough.

James sent a Facebook friend request to Maggie. She accepted. He had once been the love of her life and the man she thought she would spend eternity with, but life got in the way, they both made some missteps and they chalked it up to being young and foolish.

But so much had changed since that time so long ago; she had changed.

She was now married with two young children, most days attempting to keep her head above water to keep from drowning in the myriad of sleepless nights, disconnection and attempting to control a toddler. Maggie was numb. She was empty and most days, she felt incredibly alone.

Her husband was a good man and a good provider for the family, but supportive, intimate, and vulnerable he wasn’t. He was responsible and stable; she craved something new and interesting to look forward to each day.

Maggie’s father passed away and now, while grieving and doing her best to take care of his estate for the family, she began taking stock of her life. She began asking questions she was just too damn tired to ask herself previously; questions like, “Am I really happy?” and “Is this all there is?” The answers that were coming were unsettling, but she didn’t know what to do about it. This was her choice. This was the life she architected and created. She knew she needed to make this work.

Enter ex-boyfriend, James, from long-ago. He was married, had a good job, what looked like a nice family; it actually gave Maggie some comfort to see her for herself that he was doing well and that he seemed happy. She had loved him years ago and always wished him well.

Their initial Facebook messaging conversations were innocent, the two of them catching-up on all that had changed in their lives. It only took a few weeks for the conversation to move to text messages and becoming a bit more flirtatious. Nothing that couldn’t be explained if ever seen by another, but certainly testing the water to see what is reciprocated.

That was the point where everything shifted for Maggie. She began confiding in James. She began telling the truth about how she felt about her life; and he opened up to her as well. She began distancing herself from her husband. She felt seen and heard for the first time in more than a decade. And now, even though it was only a conversation via text, she finally had something to look forward to when she awoke each day.

She knew it was dangerous. She knew she was playing with fire. But she couldn’t turn away from the heat it provided.

The relationship with James grew deeper. She carried both anger and resentment, as well as increasing amounts of guilt and shame. Now there’s something keeping her up at night that isn’t her kids.

Does she stay in her marriage? Was it ever right to begin with?

What will people think? Will they judge her and think it was all her fault, without knowing the emptiness that arrived in her marriage long ago?

Could she and James ever really be together? They say, these can’t ever work, but why does it feel so real?

Will she ruin the lives of her children? Is she being selfish?

Is this a mid-life crisis? Will the spark in her life and in her marriage ever come back?

Sure, it’s easier to share intimate details of your life through a Facebook affair or late-night texting than it is to have an open, honest, face-to-face conversation about what’s missing in your relationship…

Clearly, you and your spouse know everything about each other after all this time; but this feels easy and fun and new….

To feel connected to another human being is powerful…of being really seen, heard and understood…

It’s possible that your life has become routine and now all of a sudden, you feel alive again…

But, these incredibly difficult and painful questions rarely have easy answers and there is no one right answer for everyone. Sure, there are a lot of people that will tell you it’s wrong and what you’re feeling isn’t real…and maybe they’re right. But maybe they’re not…and isn’t it important to get your answer for your life? 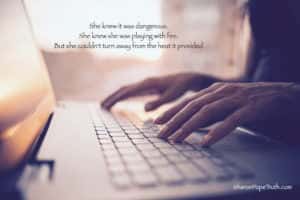