The Guardian of His Solitude

“The point of marriage is not to create a quick commonality by tearing down all boundaries; on the contrary, a good marriage is one in which each partner appoints the other to be the guardian of his solitude, and thus they show each other the greatest possible trust.” Rainer Maria Rilke, Letters to a Young Poet

My client’s husband values freedom more than anything; freedom to express himself, freedom to live his life on his terms, even the freedom to be able to leave at any moment. Feeling the weight of shackles of any kind is like his own personal prison.

His sense of freedom….adventure…passion is frankly what drew my client to him in the first place. She wasn’t seeking safety and security; she knew how to do that for herself. What he brought to the relationship was an alive-ness that she hadn’t felt in previous relationships.

Now that there was a child, there were responsibilities.

And with those responsibilities, came increasingly less freedom.

And less freedom felt like a prison, so my client and her husband began arguing A LOT.

They argued about what needed to be done and who should do it.

They argued about how each of them should feel, rather than hearing the reality of how each truly felt.

They argued their points in order to be right.

This pushed them to separate; to be able to take a breath away from one another.

My client brought me this quote that I reference above and the idea of being the “guardian of his solitude.” She liked that idea…

We explored together the idea that the one thing her husband needs in order to be the absolute best version of himself is freedom. For her, it was adventure and curiosity.

So, what if she began thinking of herself as the Guardian of his Freedom?

And he began thinking of himself as the Guardian of her Adventurous Spirit?

How would the relationship between them change?

If she was the protector of his freedom, rather than trying to take away his freedom…

I’ll bet he would see her as a partner… rather than an adversary.

I’ll bet he would be able to hear her words differently…as encouragement rather than criticism.

I’ll bet he would be able to be his most creative, his most fun and his most loving self.

And even if the marriage doesn’t last forever, she wants him to be the best version of himself. After all, he’ll always be her daughter’s father and she wants him showing-up as the best father possible.

That night, I got into this conversation with my husband, Derrick.

What Derrick values more than anything is peace of mind.

So now I’ve begun thinking of myself as the Guardian for his Peace of Mind. And I do it selfishly…

So I will guard that All. Day. Long.

What is your spouse’s one thing? What’s the one thing that when they have it, everything else in their life clicks? How can you be the Guardian of that one thing that makes him……most fully himself? 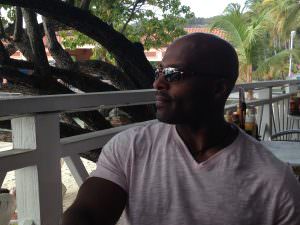