How to Heal After an Affair

“The wound is the place where the Light enters you.”  Jalaluddin Rumi

Words fail to describe the gravity of how it feels.

A million unanswered questions spin around and around in your mind…

Then slowly, as time passes, you begin to walk out of the shock and fog and get to a place where you want to heal the hurt. That’s the time when you’re ready to look at the cracks in your marriage, before any of this happened.

Affairs don’t happen in marriages with a firm and healthy foundation. It’s time to face that there was something broken, something missing, or someone really struggling for this to occur.

Know this: An affair is a symptom. Sure, it causes its own new set of problems. But, it’s a symptom of a much greater issue.

My client, who I’ll refer to as Donna, had an affair and her husband found out. They were trying to heal their marriage, but they struggled because he kept bringing up the affair again (and again and again). Here’s why:

Looking only at the affair kept him safe and able to play the victim role.

You cannot heal what you’re not willing to look at.

Be willing to look at what wasn’t working for one or both of you before the idea or capacity of infidelity took root. That’s what needs to be healed. If that deeper issue in the marriage isn’t healed, the symptom of an affair could happen again (and again and again). 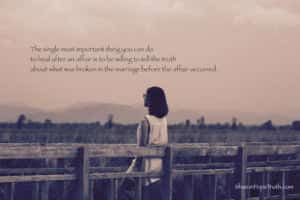