Would You Stay if Your Husband Cheated? Three Questions to Help You Decide if You Should Stay or Go.

“Love doesn’t commit suicide. We have to kill it.” Diane Sollee

In our Western culture, monogamy is so widely assumed that it’s rarely even discussed before marriage. But that broad assumption that neither you nor your spouse will cheat doesn’t take away the risk of it occurring. As a matter of fact, according to The Normal Bar, one of the most extensive studies on romantic relationships ever completed, 14% of women and 26% of men admitted to having an affair.

Some will admit their cheating to their partners and other times, their partners find out on their own. Once the affair or indiscretion becomes known, the partner who has been betrayed has a decision to make: do they stay or do they go?

Was there an Emotional Connection? When women love, we often love with our whole selves. You don’t just get our bodies, you may very likely also get our hearts and minds leading to an emotional attachment. Therefore, women may mistakenly assume that their husband formed an emotional bond with this other woman, when maybe it was just the physical act, even if done more than a single time.

In order to determine if you are able to stay in the marriage after your husband cheats, it may be important to understand how deep the emotional connection was between your husband and his partner.

How Firm is the Foundation? Discovering infidelity, particularly when it takes you completely by surprise, can make you question everything:

When you came into the relationship, you both (said you) wanted one partner for your life. Is that still what you both want?

Infidelity can provide the opportunity for some much-needed conversation about the foundational elements of the marriage to make sure you still have a foundation on which to build. Without that, you’re attempting to re-build on unstable ground.

Are You Up to the Task? Recovering after an affair requires a great deal from both parties. If the husband cheated, he now has to rebuild trust and the wife now has a great deal of forgiveness work to do.

Both will need to address each of their respective roles in what was broken in the marriage to begin with in order for one of them to seek love and affection, comfort and connection outside of the marriage.

Bouncing back after an affair will force both spouses to identify where they had placed their relationship on auto-pilot and stopped giving it the attention it needed to remain healthy.

And then, you’ve got to be willing to do things differently (otherwise you will simply find yourselves right back at this same painful place again in the future).

It takes a great deal of effort by both people in the relationship to recover after an affair. To make the decision about whether to stay or go, you have to know for certain that both of you are willing to put in that level of effort to rebuild the marriage and help it evolve into something different than what it was then or is now.

It is possible for a marriage to recover after a spouse has cheated, and that process may look and feel slightly different when it’s a wife trying to move on after her husband’s infidelity. She will want to know, not just about the physical betrayal, but also the depth of the emotional betrayal. She will want to know if they still agree about the foundational pieces of their marriage. And she will want to get clear about if she’s willing to put in the effort that will be required, in addition to her husband also making the effort, to overcome this challenge and create something new together.

If you’re ready to get the clarity you need whether you should stay or go, schedule a complimentary Truth & Clarity session with me. I help both individuals and couples understand if their marriage can be healed or if it’s time to lovingly release it. 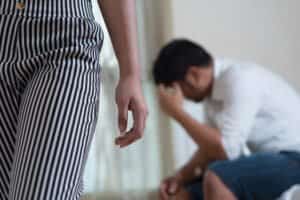