If you husband left, or threatened to leave, this post was written especially for you.

“When you come out of the storm you won’t be the same person that walked in. That’s what the storm is all about.” Haruki Murakami

Kaye’s husband, James, had just made a pot of coffee and was standing over the breakfast bar drinking it, looking as though he was a million miles away. He was in his business casual attire that Friday morning, ready to head out to the office. Kaye comes into the kitchen, pours herself a cup and as she’s adding the cream to her coffee, James drops the bomb, “Our marriage is over. I want a divorce.”

What? Did he just say what I think he said?

Why? Why would he want a divorce?

What happened? Did I do something wrong? Is he having an affair?

She just stood there in shock, not knowing what to say or where to even begin with all the questions that were simultaneously racing through her mind. Knowing they both had a full day in front of them, she just said, “Let’s talk about it tonight,” and off he went.

That was the day that Kaye contacted me.

A week or so later her husband left.

Kaye felt blind-sided and considered that maybe he wasn’t serious and that maybe this was just a knee-jerk reaction to him being both overly stressed at work and generally irritated around her lately. As she re-lived that moment over and over in her mind throughout the day, she was convinced that she hadn’t seen this coming…or had she?

No one falls asleep next to their beloved deeply in love one night and wakes up the next day without that lovin’ feeling. Of course, love ebbs and flows over the years. Sometimes we feel closer to our partners than other times.

But when Kaye looked more closely, she couldn’t remember the last time she felt really close and deeply connected to James. She couldn’t put her finger on the one thing that created that distance or that day that things changed between them:

Maybe it was when both their careers became more demanding.

Maybe it was becoming consumed in their lives and activities of their children.

Maybe it was something she hadn’t been aware of…but she could no longer deny that the distance had become so wide that James now didn’t think it could be bridged.

On many of the freeways, just off to the right are rough treads or rumble strips – those bumps that are there to startle you awake if you doze off or aren’t paying attention. Their purpose is to alert you before you end up in the ditch.

Kaye and James had been riding on the rumble strip for a while.

And as often happens when you disregard the warnings, now they’re off in a ditch.

It is possible that, through our work together, Kaye will be able to find her way back to James – and he to her. The work I am doing with Kaye may be the metaphorical tow-truck that can get them back onto solid ground as a couple.

But, the real point of our work is to make sure that even if the marriage remains in the ditch that Kaye pulls herself out and doesn’t remain stranded and lost.

The problems in our marriages don’t happen in an instant, although sometimes it can feel like that. The deepest most damaging problems happen slowly over time:

Is your marriage or relationship on the rumble strip? If so, now is the time to wake-up and pay attention, to take action before it lands in the ditch.

Is your marriage already in the ditch? Then, it’s time to pull yourself from the rubble.

Either way…I’m your tow-truck driver. 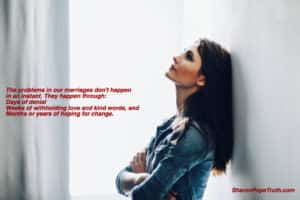