What I’m Learning from Coaching Men

“When we are no longer able to change a situation, we are challenged to change ourselves.”  Viktor E Frankl

From the beginning, I always knew I would work with women – particularly women of a certain age….those of us who are old enough to know where we’ve gone wrong and determined enough to create relationships that feel connected and intimate.

But I’m not sure I ever saw this one coming…I’ve started coaching men.

Men that want to be the man they know they can be.

Men that genuinely want to make every attempt to make their struggling marriage work.

Men that are willing to dive into parts of themselves that they’re kept under lock and key for a long, long time.

But the experience of coaching these men – and them trusting me with their journey – has been surprisingly profound for me.

As I expected, the men I’m working with aren’t as introspective as the women I work with, but that means they also haven’t stewed or analyzed the depths of their relationship for years and years.

These men don’t want to lose themselves in this process, they just want to know themselves better and be equipped with some tools to navigate love.

And to my surprise, they are struggling with some of the same things as my many women clients – albeit in a different way – such as people pleasing, perfectionism, and not expressing their needs or feeding their own desires.

Those men that have stepped forward in this way is a big deal. Because research shows that the biggest shame trigger for men is not having an answer and having to ask for help, those that have hired a coach to help them – a female coach, no less – are among the 1%. They are diving in to do the work that 99% of men either won’t or can’t do in their lives.

And I have nothing but admiration for their courage. 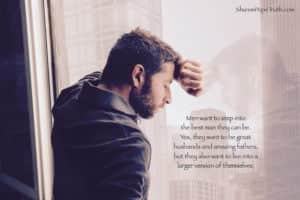