“The truth is rarely pure and never simple.” Oscar Wilde

Virtually everyone believes their thoughts as Truth (with a capital T). No one walks around thinking, “I think I’ll believe that lie.” And yet, all of our beliefs are simply perspectives – not right or wrong, good or bad – just one person’s perspective.

But some of the beliefs we carry as if they are inevitable truths that will for sure come to fruition or that they are irrefutable facts. They’re often not. Outside of needing oxygen and water to live, there are very few beliefs we carry that are irrefutable facts. But when we never look at or challenge those thoughts and beliefs within us, they influence every decision, every experience and every relationship we have.

When you find a deeply held belief, it’s a good idea to get curious about it. You don’t have to wrestle it to the ground or beat yourself up about it; instead, just be curious. And typically what you will find underneath that belief is some form of fear.

Here’s one I hear all the time: If we make the decision to divorce, our children will suffer.

The people I speak with have thought that for so long that it has become a deeply rooted belief that they hold tight to and it keeps them paralyzed in fear. No parent would intentionally hurt their children. They may even go looking for mountains of evidence and statistics online about how other children have suffered after divorce to support this belief.

But just because that has been the experience of other families does not mean it is a given and would absolutely be your family’s experience.

I have seen children begin to thrive in new ways after settling into the change that divorce brings.

They learn that change is okay and while uncomfortable, it will not kill them.

They learn how to set new boundaries and express what they need.

They get the opportunity to see their parents as happy adults.

They may get the opportunity to see what a healthy and loving relationship looks like if one or both parents gets into another relationship that is more emotionally stable.

Suffering is not an inevitable truth.

But how a divorce is handled by the parents makes all the difference in whether or not the children suffer. Most people don’t do this well, acting out in hurt and leaving a trail of pain in their wake.

Here’s an example you may have seen on Facebook of someone who has navigated divorce in an emotionally mature way (and I promise his children are being impacted positively by the way he’s chosen to handle it): 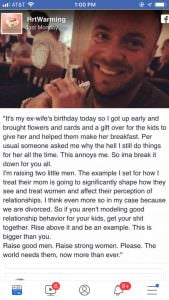 What if there’s no such thing as an inevitable truth? What if our beliefs are really just our fears in disguise?

What’s really the truth? The truth is that there’s precious little that can be defined as absolute and inevitable.

Challenge those beliefs that you hold to tightly because it’s typically fear wrapped in the disguise of truth and influencing our choices, actions and how we’re showing up in our relationships.