Was My Ex a Narcissist?

“Narcissists can make you fall in love with them so hard that it feels like you’re giving up a part of your heart to leave them.”  Dr. Judith Orloff

I’ve often said that “One day I’ll write about narcissism,” as I see my clients struggle with it and as I recall my own personal struggle with it many years ago. That day is today. This is an excerpt from that book. My prayer is that it’s helpful for you or someone you love.

I don’t know if our culture has bred an entire generation of narcissists, if we have more information available to us today about narcissism, or if placing that label on the one who broke our hearts makes it easier to understand what happened for the purpose of moving on. Maybe it’s a combination of those things.

The manipulation these women, my clients, experience throughout the relationship and following a breakup can crush their self-esteem, destroy their emotional foundation, and make them believe they’re going crazy. Getting over a narcissist can be a long and painful process. So it’s not surprising that these women reach out for help.

How Do You Know?

A ton of information has been written about how to identify narcissists – much of it written by psychologists and psychiatrists – because narcissism is a disorder, it’s not curable, and it’s incredibly dangerous.

Some of the most common characteristics of narcissists include:

They have an over-inflated sense of self-importance: The world revolves around them.

They have a sense of entitlement: If they want it, they believe they can have it, regardless of consequences or impact to others.

They require constant admiration and attention: They turn conversations and the spotlight on themselves.

They manipulate people to serve their own interests: They get people to do what they want through manipulation and withholding love.

They are constantly dissatisfied: They will take whatever you have to give and always want more. Takers always find givers.

They lack empathy: They cannot see what they’re doing and they have no regrets about their actions.

They lie easily: Because they believe they can and should have whatever they want, lying is just part of their process.

They are incapable of intimacy: They cannot have deep conversations about purpose or meaning and cannot share their hearts, not because they’re holding out, but because there isn’t anything there to share.

They can quickly and easily move on after a relationship ends: They never want their cadre of admirers to dry up, so they need to continually replenish.

Even when the relationship is over, your narcissist may continue to try to pull you back in, time and again. Not necessarily because he wants to get back together with you, but so that he still has you in the harem of admirers he can control and from which he derives his self-worth.

My client, Debbie, was married to a narcissist for seven years. If she did something that was outside of his house rules (such as leave the mail on the kitchen counter), he would become cold and distant, withholding his love and attention for days as punishment. Sometimes he would throw a temper tantrum when he didn’t get his way and she would pay for it for days with his silent treatment. When they split, he kept checking to see if that door was still open. In order to move on from that relationship, Debbie had to set a very distinct no-contact boundary and stand by it.

My client, Julia, became involved with a narcissist who manipulated her into being at his beck and call and giving him money. He would say, in a desperate tone, “Tell me you love me.” And she would. But he would never say it back. Everything was always about him and on his terms, even where and when they would have sex. He had a girlfriend that he lived with and any number of other girlfriends that he bounced between, to feed that ego and his unending appetite for having all the attention.

Here’s What You Need to Know

He is completely incapable of acknowledging your feelings or understanding and validating your pain. You don’t need to say it more clearly, find the right words, or raise the volume, because he cannot hear you.

Inside of that relationship, you likely felt emotionally alone for most of it. He may have met your needs periodically, but that was only if it was in his own interest. But it kept you believing he was really a good person, deep down. It gave you hope, it kept you on the hook, and it made you easier to control.

Even after you’ve broken up, he will still attempt to control and manipulate you. He may attempt to communicate with you about other random things unrelated to the relationship. He will consistently check, again and again, to see if that door is still open with you.

You get to decide when that door is closed and locked.

You get to decide when the pain and manipulation stops.

If you don’t have children together or any other tie that forces you to remain in communication with him, cut off all contact. Complete cold turkey. Unfriend him, unfollow him, and lose his number. That is a hard and clear boundary and the only way to protect yourself.

He will not change, I promise you. He cannot change. You cannot love him enough to change him. Narcissism is a disorder. And it’s brutal to your soul. 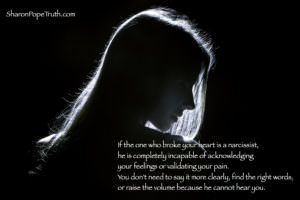