You Can Trust Yourself Again

“Everything you want lies on the other side of learning to trust yourself.” Vironika Tugaleva

One of the things that will keep women stuck in solitude after a divorce, I’ve found, is a fear that they will again make the wrong choice or another mistake in who to love. They don’t yet trust their instincts (or they don’t trust men, which is just another flavor of not trusting yourself that you’ll be able to decipher the good ones from the bad).

Peg was a new client who was ready to dive in deep after her failed relationship so she could finally escape the pain that she had hung onto for far too long.

She wanted to be able to have a relationship again someday, but she knew that this last one had wounded her so badly that she would carry that pain into future relationships and she would continue her cycle of heartbreak.

She would be overly suspicious, distrusting, and always assuming the worst.

She would be guarded so as to not be hurt again, but not open enough to make a connection.

She would make a potential future love pay for the sins of past loves, unintentionally sabotaging the relationship so it never really stands a chance.

She knew she would just cause herself more heartache if she didn’t heal the hurts and learn to trust herself again.

She had been carrying the story around in her mind that men shouldn’t lie. After all, she had a long-term boyfriend that cheated on her repeatedly and to whom lying came easily. She also had a marriage where her husband hid his drinking until it became so bad that it was undeniable and abusive.

So, she had plenty of reasons to be suspicious, to not trust men and to keep her heart under lock and key.

But when she was willing to look deeper, here’s what Peg realized:

These men weren’t the only ones that lied. She had lied too.

It would be so easy for Peg to move right into shame and self-loathing from that place, and believe me, she tried. But what I helped her discover was now that she knew what role she had played in her love experiences and what her patterns in relationships had been, all she had to do was shift that one thing and every future relationship would look and feel much different than these past painful relationships.

She made a commitment then and there to never to lie to herself again and never to abandon her heart (or needs, or wants or voice).

She now had all the power.

She had everything she needed to trust herself again.

Here’s what Peg had to say: I was stuck and couldn’t move forward. I felt I couldn’t afford the session and overnight realized that I could not afford to pass by his chance, to work with this woman who I somehow felt could get me through this. Within 2 sessions, I am no longer stuck but strong and ready to open my heart again for a new beginning! She is amazing, skilled and has been there. 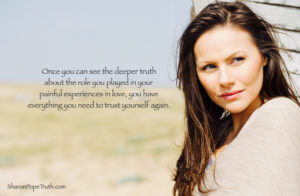