What if You were Already Alone?

Jeanne had 3 young children and a successful career in Sales. She worked hard in her job, she took care of the family, the home, paid all the bills, did all the laundry, cooked all the meals and was exhausted at the end of each day.

Jeanne had also been living in a loveless marriage to her husband Nick for more than a decade. Towards the end of their marriage, she couldn’t remember the last time she and her husband had kissed or even held hands. She was feeling discarded, abandoned and completely alone.

When Jeanne made one last effort to save the marriage by asking him to go see a marriage counselor with her, Nick simply said, “I’m not the one with the problem. I’m fine. But if you want to go see a counselor, you can.”

What she didn’t realize then, that she realizes now, is that she was already alone, long before the marriage actually ended.

Kate had been diagnosed with fibromyalgia and doing everything she could to take care of herself and their children. It was during that time that she found out that her husband hadn’t really just been working extra-long hours with lots of travel. He had been having an affair with a co-worker while she was struggling with her health.

What Kate later realized was that she had been alone for a very long time; before the last child, before the diagnosis and long before the affair.

Paul tried everything he could to make the relationship work with Brittany for years. He forgave her time and again for being unfaithful. He believed her when she told him that even when she’s with other men, “All I can think about is you.” Paul was alone for most of the time that he and Brittany were together.

When people are considering the incredibly difficult decision to leave a relationship, many times the thing that keeps them stuck long past the relationships’ expiration date is the fear of being alone.

But what if that thing they fear the most – being alone – has already happened, slowly over time?

People leave relationships long before the relationship actually ends. They may leave mentally, emotionally or physically (by not being present and / or sharing their love with someone else).

What if the relationship you’re mourning only gave you 2 choices:

What if you were already alone? 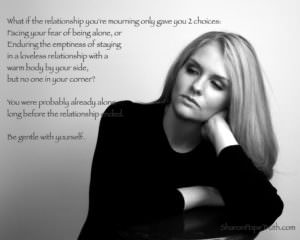 Tell the Truth. Show up in Love. Live in Freedom.