“Any action is often better than no action, especially if you have been stuck in an unhappy situation for a long time. If it is a mistake, at least you learn something, in which case, it’s no longer a mistake. If you remain stuck, you learn nothing.” Eckhart Tolle

My client, who I’ll refer to here as Mary to protect her privacy, is stuck in indecision about her marriage.

Marys’ relationship with her husband, Dan, has grown stale over their 16 year marriage. They stopped having meaningful conversations or dedicated time together once they began having children.

The connection between them has become, “How was your day?” to which the other responds, “Fine,” because it’s just easier than sifting through all the details.

The space between them has been filled with shuttling the kids to their activities, play dates, homework and maybe six hours of sleep at night, if they’re lucky.

The intimacy between them has been stifled as they’re each exhausted and rarely intimate with each other. Dan is a decent man and a good father.

Mary is in a marriage that is good enough. It’s not painful enough for her to leave, but it’s not inspiring enough for her to stay. She no longer wants to limit her life and live in what feels like a small, dark box, but she fears all the unknowns that would await her if she made a change.

Most of what keeps us stuck are beliefs we’ve created over time. Thoughts that we’ve come to believe as truth that may or may not actually be true. Beliefs like: 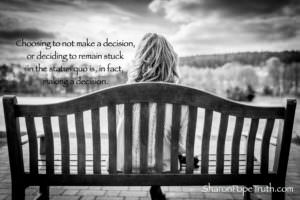