Marriage Vows and Divorce: Is Till Death Do Us Part Still Relevant?

“Waiting Hurts. Forgetting hurts. But not knowing which decision to take is the worst of suffering.” Paolo Coelho

I’ve never worked with a client who was considering the decision to potentially leave their marriage that did not, in some way, struggle with their marriage vows and divorce.

Each went into marriage with the best of intentions…

Each genuinely wanted it to last forever…

Each woman took those vows seriously.

And now each of these women, women of the highest integrity, are considering making the decision to leave their marriages, not as a result of death, but rather as a result of life itself:

Veronica lost a child, and then lost her husband emotionally, as they both drowned in grief.

Beth has been verbally abused for years and it’s been becoming more volatile.

Chris’ partner is in a deep depression and barely gets out of bed.

Even Andrea, who many would say has no good reason to leave her marriage, has fallen out of love with her husband, they barely speak and they never touch. She feels empty and alone, unseen and unheard in her marriage.

Sometimes people grow, evolve and change – and sometimes that leads two hearts in opposite directions.

Sometimes people lose their way, numb the sharp edges of their lives and cause deep hurt to others in the process – and sometimes that hurt cannot be overcome.

My job as their coach isn’t to judge them….or even tell them what they should do.

My job is to help them see the truth of where they’re at, how they got to this place and how to create change for themselves.

My job is to equip them to walk through whatever fire is standing before them.

My job is to hold the light for them so they can find their way through.

When it comes to marriage vows and divorce, maybe rather than staying together until death do us part, no matter how incredibly miserable we make each other – because it’s the “right” thing to do dammit, maybe we make our very best effort to heal what’s broken so that it can feel good again or gently and lovingly release it.

If you’re struggling with this decision and you’re ready for THAT level of clarity? Let’s talk…

Sent with much love and light – 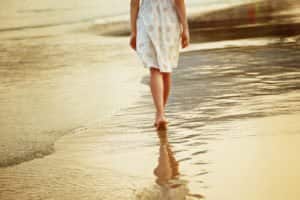