I had a client recently who was just a kind and open hearted man that struggled with his own anxious tendencies within the relationship.  He loved to help out and be of service to those around him and really stepped in when it was needed. Although necessary at the time, it ended up that he had created quite a bit of codependence inside of his marriage.

He did everything as it related to taking care of the kids, took care of the laundry, household chores, created and ran a profitable business, provided financially for his immediate family and extended. Made all of the important decisions, handled the finances, vacations, kids school events, you  name it. He did all the things. He did this because he genuinely liked it and wanted to make things easier on his wife. When she was not happy, he wanted to try and “fix it” and “make” her happy. So little by little, he did more and more.

When he did all of these things, he was so busy with everyday life, that he didn’t have to manage his own insecurities or his own emotions. He did not have to really feel the anxiety or find a way to communicate was he was feeling and needed and wanted within the marriage.  He would basically just orient his actions to what was going on, and to keep his wife happy. This may not sound so bad really, and maybe it seems familiar to you in some way.

Truthfully, though, he spent a lot of time walking on egg shells. He did not want her to get triggered because the minute she just showed some sign of anger, some sign of displeasure or unhappiness, he would have to communicate his feelings and that never went well. Eventually, he learned to just shut it down and handle the “business” of being married. He did that because he wanted to keep the peace. He didn’t like to argue or express his feelings in case it made her more unhappy so he just kept trying to do more things, keep the peace, and handle anything and everything he could that she was displeased about.

The problem with this pattern, is that his over taking responsibility led to her under taking responsibility.  There was no real motivation for her to manage her own life if he’s going to do it for her. There was no real reason for her to step into the role of being a mother and a wife if he was going to do it all for her. Not only are those hard shoes to fill, but there was never really much of an “on ramp” for her to step into the flow. He was a whirlwind of action and getting things done, and did not seem to need any help, and there was not any space for her to jump in.

She was not stepping into those roles as wife and mother fully because it was being done but she was also just going along with it because it was easier.  He didn’t want to have the difficult conversations and really talk about some things that needed to be addressed inside the relationship and neither did she. So while she became complacent, they both became resentful and the relationship became codependent.

When we started working together he really wanted to change that dynamic and he thought that it was going to require her to change. He thought she needed to step up, she needed to start taking responsibility, except that he had no control over her.

So what could he do? A lot actually.  He could make space for her to step into that role of being a mother and wife. I say make space  because when we are so busy doing everything there is no space for her to step in as an equal partner and she doesn’t have to, because it’s not required. When you make space for her to be able to step into that role, there is possibility. He also needed to stop over taking responsibility for her feelings and orienting his life around making sure she didn’t get triggered. Why?  Because emotions, reactions and the things that someone gets triggered by are not ours to manage. That is for them to manage. We can only manage ourselves.

He was also going to need to have some difficult conversations and he was going to need to learn how to set some healthy boundaries. In general we were not brought up doing this, or doing it well.  At some point it was spoken or unspoken that to be nice or to be a good partner means that you put what everyone else needs first. Oftentimes at the expense of ourselves, but when we do that, we enable our partners too under perform. Under perform inside the relationship and inside their own lives which creates a codependent relationship. Not only is it not healthy, it doesn’t allow either of you to really stand in your power.

If you think you might have some codependent tendencies inside of your relationship and you want to make a change then I invite you to schedule a complimentary Exploratory Session to see if there’s a fit for you and I to work together. 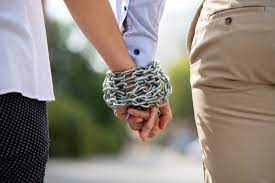