Do You Have To Forgive And Forget?

Forgive and Forget? Do you have to forgive and forget about past hurts in order to move forward in your relationship.

This is a common question and one that really comes up over and over. Today I was working with a client who has some pretty deep hurts that have occurred inside of his marriage over the last 17 years. There have been several times in their lives that have been very difficult and filled with challenges and instead of both of them facing those challenges together as a couple, they essentially shut one another out. So much so that during one of the most challenging times in his life personally, his wife pretty much just checked out, and she ended up having an affair.

Now a lot of people would look at this and just take that action at face value and say “well you know, that was a really terrible thing to do” and “she’s not a very good person.” So maybe that wasn’t a very good thing to do, yes,  but that isn’t really deep enough. That doesn’t really dig in and figure out why this happened. It doesn’t explain why she ended up going and looking for someone else.

She has consistently shown that when things get hard she shuts down and runs away and doesn’t really show up to the marriage anymore. She isn’t interested in engaging in that, finding an answer, or working together to make it through something tough. Her typical behavior has been too just shut down, not communicate, and disappear emotionally, essentially.

Right now, they are trying to figure out if there is a way to move forward as a couple together. He is really stuck wondering how he can trust her. He doesn’t know that he can 100% count on her not doing the same thing again if something gets hard within the marriage. He does not know if he can forgive and forget and just start over. She keeps telling him that she wants to start fresh and that he just keeps looking back. She said she just wants to move forward from here. That just isn’t realistic.

Now we all know that the best indicator or predictor of the future is the past – unless something comes along and interrupts it. We have to look at that. Just because that is not what is happening now, does not mean it’s probably just going to be fine. We can’t just stop right there and assume that everything will be fine and forgive and forget and just move forward without doing the work. That doesn’t explain anything . It doesn’t give him a foundation for being able to understand what happened and how it’s going to be different.

When there is a problem or an incident or something that’s hurtful, do you forgive? Absolutely. It’s very toxic to you and of course to the marriage if you don’t offer forgiveness. When it comes to forget, I say no. I’m not really a fan of forget. Forget is basically just burying our heads in the sand and pretending that something never happened, and I don’t think that that is something that you can do. You know something now about your partner and who she is and what she is capable of doing and how she is capable of being within the marriage, and that is really important information.

In order to move forward, we have to be able to forgive all day long, but not necessarily forget. When it comes to “do I have to just forget about the past in order to move forward?” I don’t really think that that’s possible. I think a lot of people will try to carry on that way. They will try to stuff it down, but you still carry that with you. People who just stuff things down like it never happened are still taking that with them through their life experience. That is not healthy emotionally and it ends up popping up in the marriage at some point.

We don’t have to dig up every dirty detail and go through everything that’s ever happened and rehash it and analyze it.  We do, however, need to look at some very specific questions and get those answered in order to be able to move forward, trust again, and be on the same page. So if you get really clear about what the questions are that you need answered, you can focus on that conversation in a really productive way and began to offer forgiveness and move forward together at the same time with the relationship. 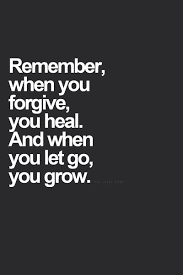