Not Attracted To Your Wife Anymore?

What do you do when you are not attracted to your wife anymore?

I am talking about what happens when the attraction between you fades. People find me in many different stages inside their marriages, and at differing stages of attraction. Some clients find me and they are still attracted to their wife but they might be struggling inside their marriage. Even to the point of considering walking away, but they don’t find their spouse unattractive.

Some find their way to me and they’re not attracted to their wife anymore and they don’t really want to be. Usually, this is because they have some built up resentments.  I have a client that shared with me some of the derogatory, insulting names that his wife had called him during arguments for example.  He did not want to curl up next to that at night and be close, and  neither would I.  I wouldn’t find a person who can say such ugly things very attractive, and he no longer did either.

Some people become clients when they are not attracted to their wife anymore but they really want to be. They want to k now if they can change things inside their marriage and they want to know how they can get that attraction back.

In order to really understand how they find themselves in these varying stages of attraction, let’s talk about what attraction is and what where it comes from. Most of us think that attraction is purely physical. Some people are attractive and other people aren’t.  Attraction is not an absolute truth, it’s a perspective. We all know someone who we find really attractive but our friend isn’t attracted to them at all right ? That’s why some people like short people with dark hair and other people like tall people with blonde hair. It’s just a preference. So attraction is not purely physical.

Sometimes we’re attracted when someone is deserving. It is as though attractiveness is based upon the thought of “when you’re doing the things that make me feel the way I want to feel, you become more attractive to me”.

Then there’s this idea that attractiveness, and being attracted to your partner is like magic. It’s a magic dust that gets sprinkled on you or it doesn’t.  Some couples get sprinkled and other couples do not. Now we know that is just not true. Chemistry has a little bit of magic to it but attraction is not really that magical.

So how do you reignite the attraction that you have with your partner?

So, just as an experiment, I want you to try doing this for a few minutes, twice a day, for two weeks and see if that doesn’t bring back some of that attraction, some of that appreciation, some of that loving feeling for you. Focus on the things that you really appreciate about your partner – it might just make all the difference. 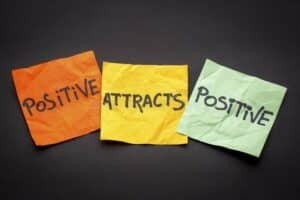