Verbally Abusive Relationship – Are You In One?

The verbally abusive relationship is one we have all heard about at some point. Yet when we try to define it, or decide if we are actually in one, things become a bit less clear. I have been in one myself, and as strong, driven, type A, sort of woman this was a hard thing to accept. I could not imagine how I could have come to be in a situation like this, much less continue to allow it, but there I was.

Women are not the only ones who experience the abusive relationship. Many men do too, and you can imagine how difficult it is for them to even wrap their minds around that they would be in an abusive relationship. Mainly because that’s just not something that they identify with, but also because they do not really see all of the things that happen as abuse. Men are often expected to be strong, and stoic, and suck it up and not really express a lot of emotion. Especially around something like abuse, and when it is happening to them.

I want to share a story about one of my clients. He and his wife would go to marriage counseling together every week. They had been going for about 6 months. When they were at the counselors office, it felt like a safe environment so they would both share their issues and their challenges. They would both talk and listen and it seemed like the sessions went well each time they left. He would leave the session and feel like they had made some progress and said it seemed like they were both getting to be heard. By all accounts, even the therapist, it looked as though both were working hard on the marriage.

When they got in the car, his wife would not really say much and did not want to talk at first. He would try to keep engaging in conversation and then she would start pointing out everything he did and said in the session that was wrong.  She would call him names, put him down, insult him, belittle him, tell him that he is a horrible person and a bad husband.  She would blame him for everything that was wrong in her life and it was always somehow his fault. She would do this through yelling. This is, in fact, verbal abuse.

He would explain that she was upset, or thought that maybe she had a bad day or was stressed about her job. Sometimes he mused that things had been challenging for a long time and that they just did not know what to do. He thought maybe he did say something in the session that made her mad and that was what caused it. He has been living this way for so long and became so used to the interactions that he got used to it so to speak. He had built up a tolerance to the outbursts and as they escalated he was able to normalize them more and more. The things is, he is in a verbally abusive relationship- he just doesn’t recognize it as abuse.

While we were talking, I asked him “what if it wasn’t words that she was throwing at you? Let’s say she was hitting you and throwing things at you. Would that be okay with you?” He said “no  of course it wouldn’t be okay.”  So he agreed it was not okay if she was lashing out physically and could not control her anger and emotions enough to have an emotionally healthy conversation. Then, I asked him, “if that is the case, then why is it okay for her to be hitting you with words in a way that she can’t control?”

What if your parent was in a relationship like this? Your good friend? Your brother or sister?

We all get in arguments sometimes, but it is not okay to have that done to you consistently.  It is not okay when it’s always like that; yelling at you, calling you names, degrading you, raising their voice to the point where you want to shut down. That is verbal abuse and it is NOT okay.

Hopefully this is helpful for you to understand what a verbally abusive relationship can look like, and whether or not what you’re experiencing could be verbal abuse.

If you want to know more about how you can step up for yourself in verbally abusive relationship and how you can do things differently, I invite you to schedule a complimentary Exploratory Session with me. Let’s see if we are a good fit to work together and start making change you can feel good about. 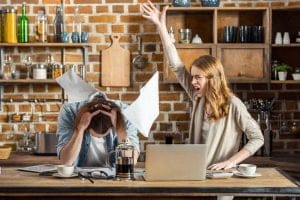