Why Arguments Never Get Resolved

One of the things I help my private clients do is identify the patterns of engagement with their spouses, specifically how they argue or disagree with one another.  It usually looks something like this:

She expresses something that hurt her, such as “You don’t listen to or understand me.”

He takes that as a personal attack and now feels the need to defend himself.

She tries to get him to see her perspective.

She shuts down and walks away.

They don’t speak for a few days.

It blows over…their arguments never get resolved…they go back to life as usual with a bit of resentment tucked away.

Neither feels heard or understood.

Both feel justified, right and a little righteous.

The pattern repeats itself in a few weeks or months and nothing ever changes.

Once we can see the pattern laid out in front of us, we can make a conscious decision about where to interrupt that pattern and do it differently.

One place this pattern could be interrupted is at the very beginning, in the way the hurt is being expressed. My clients are like most people, they express hurt to their partners in a way that feels true from their perspective, but requires evidence in order to determine who’s right and the arguments never get resolved.

Instead, they can learn to express themselves solely from their perspective – which cannot ever be argued.

For instance, rather than “You don’t listen to or understand me.” You could say, “I feel like I’m not making myself clear,” or “When you say you’re going to do something but then don’t do it, I feel like you either don’t hear me or don’t understand what I’m asking.”

We argue because we’re expressing ourselves in a way that is arguable, debatable, and therefore, needs someone to be right. But when you simply express your experience (by starting your sentences with “I feel…”), it becomes inarguable.

No one can argue with your experience because no one has the ability to truly understand your experience. Also, you’re just expressing how you’re feeling to your partner, not attacking them, so there’s no need for them to defend themselves.

A small tweak with a big impact.

Try it. Rephrase each of these sentences:

Your mother is always criticizing me.

You don’t have my back in this marriage.

You said you were going to try, but nothing has changed. 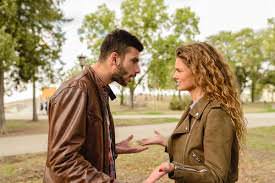