What if No One has to be Wrong?

“An open mind, in questions that are not ultimate, is useful.” C.S. Lewis

Aubrey had received a phone call from her husband John, and he was fuming. She had communicated something to his mother that he felt wasn’t appropriate and that action really upset him. When she picked up the phone, she was feeling verbally attacked by John:

How could you do that?

What were you thinking?

Do you have any idea of how that made me feel?

Whereas only a few weeks ago, this would have turned into an enormous argument that would have created even more distance and resentment between them. But now, equipped with better tools, Aubrey listened to John’s concerns and then said two simple, but magical sentences:

“I felt that it was important to communicate that to your mother because it impacts her as well, but I am also really sorry about the impact it had on you. That was never my intention.”

He heard her and accepted her apology.

She wasn’t making herself wrong, so there was nothing to defend.

She didn’t make him wrong for being upset or for feeling hurt.

Both perspectives are equally valid and no one had to be wrong.

Clearly, in the heat of the moment, it is difficult to do the mental gymnastics it takes to not immediately go into the defensive mode and to not attack back when you feel like you’re being attacked.

But it is possible….

It is totally possible with some training, some practice and a very large dose of self-awareness.

That’s how you do healthy relationships.

If you’re ready to get equipped so that you can elevate the way you are showing-up in your most important (and possibly your most difficult) relationship, then maybe we should explore whether or not there’s a fit for us to work together. 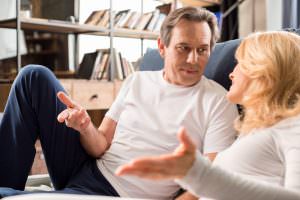