“When you show deep empathy towards others, their defensive energy goes down, and positive energy replaces it. That’s when you can get more creative in solving problems.” Stephen Covey

If there is one area that every single couple can improve upon, it’s communication.

Almost every time we have something that we want to talk to our partners about, we enter into that conversation and set ourselves up for failure from the start.

Here’s how we unknowingly screw it up:

We have something we want our partner to know, so we begin from the perspective of what we want to say (ie: force upon them), rather than setting the stage for a real conversation (ie: an exchange between two people who are listening to better understand one another).

And since no one likes to be talked AT and told what you think they should do or not do…they automatically feel the need to be defensive.

Which means they cannot hear you.

So essentially everything you say is irrelevant and is not going to get you the result you desire.

And we do that again and again, assuming our partners don’t care about how we feel, so why even bother trying…

As human beings, most of us don’t walk around feeling like we need to defend ourselves 24×7. We don’t feel under constant attack.

But unfortunately, when it comes to having difficult conversations in our most intimate relationships, we often feel like we’re under attack (criticized, judged, belted, disrespected, etc.).

And human nature – when we’re feeling attacked – is to defend ourselves.

So when your partner gets defensive with you, rather than automatically jumping to the conclusion that he/she doesn’t care or doesn’t love you…instead, look at how you might have unknowingly put him on the defensive and change your approach.

When we’re being threatened / criticized / judged / belittled or disrespected, we will often defend ourselves.

When we’re not being threatened, we’re (typically) not defensive because it’s not necessary.

And when no one is defensive, we can hear and understand one another better.

And isn’t that the point?

PS: And before you say, “I tried that and it didn’t work.” If your last 100 interactions have made your partner feel like they are being threatened / criticized / judged in some way, it’s going to take you changing your behavior consistently at least 25 times before they put their armor down. People need to see consistency before they will trust that you actually want to have a conversation and that you care, too, about their perspective. 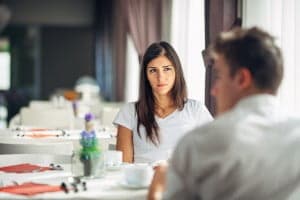