If I Stay Right Here, Nothing Bad Will Happen

Inspiration can come from many different places. This one came from my own experience in New York this week. I’ve been at a conference learning how to broaden my platform using public relations.

To be featured on TV or in magazines, I’m going to have to say some things that maybe have never been said before.

I’m going to need to be willing to hear “no,” far more often than I hear “yes.”

The thought crossed my mind (more than once…..), Maybe I don’t have to put myself out there in this way. After all, I’ve got a nice coaching practice doing what I’ve been doing.

That was my fear talking…..

That was my fearful mind wanting to stay comfortable….

That was my thoughts telling me that if I just stay right where I am, then nothing bad will happen.

I won’t get rejected….

I won’t make an ass of myself…

I won’t have to take a bigger stage.

Our minds will pop-up and tell us, Don’t do that….just stay right here…..where you’re safe and warm and where nothing bad will happen.

That’s it’s job……our minds’ job is to keep us alive…to keep us safe from harm. And it does that by giving us all the fearful reasons why you should just stay exactly where you are.

And honestly, it doesn’t matter if we’re talking about stepping out onto a larger stage and reaching more people with your business…

Or leaving a marriage that’s been dead for years…

Or making an investment that feels terrifying…

Or even making that last final attempt to make a relationship work that hasn’t been working for a long, long time.

If it’s scary, your mind is going to start talking to you. And it’s not going to encourage you.  It’s going to give you loads of evidence of why that scary thing is a very bad idea.

But only Every. Single. Time.

So, we’re presented with a choice when where we are simply isn’t enough anymore:

Believe that what your mind is telling you is truth and remain stuck right where you are:

Or, understand that your mind is just doing its job, thank it for its opinion and its attempt to keep you safe and move forward anyway. 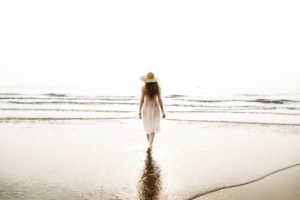