The Opposite of Love Isn’t Hate. It’s Indifference.

…You’re mostly caught in the chain of pain trying to get the other person to change…but you’re still trying to make it work, maybe in the only way you know how.

When we stop trying to make it work…

When we stop trying to get the other person to change…

We even stop fighting.

We just begin to do our own thing, not sharing information, coming home late, and confiding in others.

We get rebellious in what we will do to numb ourselves to the reality in our relationships.

We put up a protective wall around our hearts and shut down to minimize the future damage.

We’ve checked out and we begin to care less and less about what’s happening in our homes and in our relationship.

And that’s when we know the marriage may be too far gone to recover.

Because the opposite of love isn’t hate, anger, rage or blame. It’s actually indifference.

So, where are you in your marriage?

Are you still in the ring?

Are you still trying?

Or have you become indifferent?

Have you checked out?

If you need help figuring out whether or not you’re still in the ring or you’re trying to figure out how much longer you can stay in the ring before becoming completely and totally indifferent, then maybe I can help you. You’ve been doing it your way for a while now. Have things been getting progressively better or progressively worse? Maybe it’s time for an entirely new option. Let’s talk. 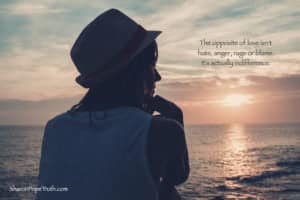