The Power in Making a Decision

“Courage and confidence are what decision making is all about.” Mike Krzyzewski

A client, who I’ll call Paula, had gotten stuck.

Six weeks ago, she told her husband that she felt it was time to separate. They had been struggling for years and it was only getting worse.

They were arguing more.

They were sleeping in separate bedrooms.

And Paula was worrying about what they were teaching their daughters about love and marriage.

She felt like their only answer was to separate.

Not surprisingly, that’s not what her husband wanted so they spent the next three hours trying to convince one another…

…him trying to convince her to stay…

Since that conversation six weeks ago, they have both fallen silent; neither wanting to cause an argument and neither really having the emotional wherewithal to re-hash it all yet again. They are co-existing in the same house. Not taking any steps to make the relationship better and not taking any steps to separate either. They’re at a stand-still. Stuck. And Paula’s getting restless for some forward motion one way or the other.

Paula didn’t express a decision to her husband; she expressed an opinion and then hoped he would agree.

There’s a very different energy to telling someone a decision you’ve made, compared to presenting evidence trying to make the other person understand or agree with you.

One is gently stating something as fact and the other is seeking understanding or approval.

One is 3-4 sentences and the other is hours upon hours of a painful discussion and possible arguing and blaming.

One you can take action from, the other leaves you stuck in your opinions.

What if Paula’s husband would never fully understand?

What if he would never agree with that decision?

It sounds harsh in this context of ending a marriage, doesn’t it? But understand, this wasn’t the first time Paula and her husband had had this painful conversation about how to fix the problems in their marriage. It wasn’t the tenth time…It wasn’t even (most likely) the hundredth time. This has been hundreds of conversations and arguments, endless battles and blaming over the course of at least the last decade. They went to marriage retreats, couples counseling, and read dozens of different marriage books and it wasn’t getting better. Paula’s husband was angry and disappointed, but he wasn’t taken off-guard. Paula had taken years to reach such a big decision.

Even if you’re not at the point of being ready to make the decision to throw in the towel on your marriage, the concept of stating a decision that’s true for you versus trying to gain consensus from two opposing viewpoints is still applicable.

There’s power in making a decision.

There’s power in getting really clear about what’s true for you.

There’s power in moving forward once a decision is made.

The torture is in staying stuck. 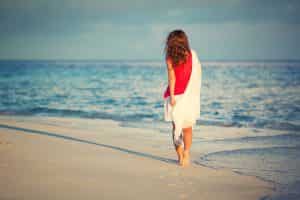