“You don’t protect your heart by acting like you don’t have one.” Unknown Author

Casey has been married for 15 years and over those years there had been plenty of hurtful words, disappointments and unmet expectations between them. So much so that she built a metaphorical wall around her heart to protect herself from being hurt again and again and again by the man that she truly did love.

She stopped making herself vulnerable to him, keeping him at an emotionally safe distance.

She stopped telling him about how she was feeling, about her dreams and desires…existing on conversations about the logistics of the home and the kids.

She stopped engaging with him…stopped accepting his advances…stopped seeing him as a partner in life and more as someone she needed to guard herself against.

So (as a self-protection mechanism) she built up a big, tall brick wall barrier around her heart…

Too solid to easily break…even though she desperately wanted connection…

But here’s the thing: it’s lonely behind that brick wall…isn’t it?

We think we’re protecting ourselves:

Can I trust that this time will be different?

Is he really sincere?

If I let down my guard, he’ll just hurt me again…

It’s an instinct…but it doesn’t serve us.

Most of the women who reach out to me – who have built up this metaphorical wall – actually really WANT to be able to trust their partners again….want to trust that this time will be different…want to have hope again. But they don’t allow themselves that luxury.

But when you think about it, what are we really protecting ourselves from?

Your brain tells you it’s from being hurt again…

If you don’t get your hopes up, you won’t be disappointed.

But that’s not true.

Even if you don’t get your hopes up and the one you love says something hurtful, you will…in fact, be hurt.

If you love someone, you are exposing yourself to being hurt by that person. It’s a risk. It’s real.

But what if you only have two options in life:

Option A: Protect your heart behind the tall brick wall, safely inside the castle, complete with the fire-breathing dragon so that you’re never hurt again…but you live a pretty lonely life back there all by yourself…where you’re never fully seen or known, but never feel the hurt of disappointment.

Option B: Love fully, completely, (dare I say…) recklessly knowing that you might get hurt, but you also might create the kind of love that you’ve only allowed yourself to dream about in the dark, quiet corners of your heart.

We know what option A looks like, don’t we?

With Option B, at least we open ourselves to a possibility that didn’t exist previously.

I will choose Option B every day of the week.

I love with my whole heart.

I’m willing to take that risk for the possibility of a love most don’t give themselves permission to wish for.

Plus, I’ve been hurt before and it hasn’t taken me down yet.

Maybe it’s time we come out from hiding behind that brick wall and open ourselves to possibility.

What’s the worst that can happen? 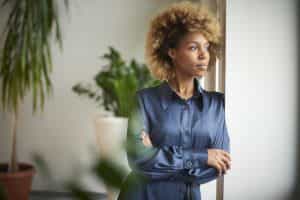