“Never look back unless you’re planning to go that way.” Henry David Thoreau

When people are struggling in their marriages, they often feel confused about what to do and scared of making the wrong decision, so understandably they begin seeking answers.

At first being in the support group feels good because they realize they’re not alone, that there are other people out there having a similar experience as them. They read other people’s stories and think maybe they’re not going crazy.

When I was struggling with these questions myself, I didn’t talk to anyone about it so I felt pretty isolated and like I was the only one in the world struggling in indecision. Knowing you’re not alone is an incredibly powerful thing.

But that’s where the benefits end in the support groups and online forums.

From that point forward, I would argue those support groups hurt you more than they help you.

The reason is because they keep you stuck in your story.

They keep you stuck in the story of all that isn’t working in the relationship.

They keep you stuck in the story of you past, which doesn’t create any visibility into a future that could look any different.

You tell and re-tell your version of your particular marriage struggles and other people identify with that and build upon it. Then you read their stories and you identify with their struggle because you’re experiencing it too.

No one in the group knows how to get out of that struggle or how to fix it – otherwise they would have done it by now and they wouldn’t be in that forum. It becomes like the blind leading the blind – commiserating about the current situation, with no real solutions to change the situation to make it any better.

And everyone remains stuck in their pain.

And you have to question anything that’s going to keep you stuck in pain.

I liken all these support groups to the equivalent of giving someone a hit of pain killers for a gunshot wound: they feel better for a bit – knowing they’re not crazy, they’re not alone, and that others are also struggling…

…but they never actually solve the root cause of why you needed the pain killers in the first place.

It doesn’t remove the bullet.

It doesn’t stop the bleeding.

It doesn’t heal the wound or rehabilitate the body.

Without ever truly solving the issue.

I know support groups – whether online or in person – seem like a good idea. But anything that is keeping you stuck in the same story isn’t helping bring you to further clarity or meaningful change. 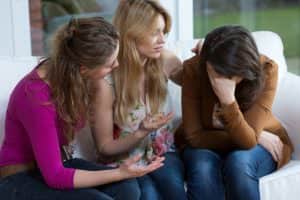