Why Can’t I Love My Husband Again?

“…after all this time, make sure you’re in love with me, and not the memories.” d.e.m. (via scribbingsanddust)

Client K. has made the difficult decision to leave her marriage. A few weeks ago she had an almost unbearable conversation where she told her husband about her decision.

She wasn’t trying to hurt him…
…or anyone else, for that matter.

But when you make a decision like that and your partner wishes it was different, hurt is inevitable.

Since that conversation, her husband’s been on his best behavior.

He has been nice, thoughtful, and patient.
He’s doing more things around the house (things she used to nag him about).
He’s interacting with the kids more and being attentive to them (which is heart-warming to see).
He is getting home earlier and asking her about her day (he hasn’t done that in at least a decade).
He’s trying to be affectionate (…but it’s awkward).
He’s in denial and he’s hoping that he can be on his best behavior and his wife will change her mind about her decision to end the marriage.

This has been going on for about a month and both are frustrated (and a little confused) about why – now that he’s being so nice – her heart towards him has not changed.

She asked me, “Why can’t I love my husband again?”

Both would love nothing more than for her to fall back in love with her husband, so they wouldn’t have to:

Unfortunately, by the time one partner gets to the point where they’ve made the heart-breaking decision to leave the marriage, good behavior and acts of kindness feel like too little, too late.

Those actions might have made a difference 5 or ten years ago when the marriage first began to struggle (where she still loved him and simply craved more from him).

But after years of neglect and animosity, her heart has changed. Now she has love for him…but she’s no longer in love with him.

Kind actions, patience, and generosity are nice, but they’re baseline expectations for a relationship to feel good. They’re not enough to save a relationship that’s been in the ditch for a while. 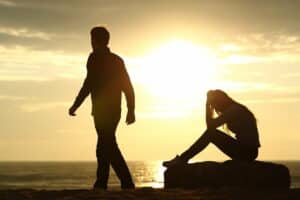