Is It Possible to Heal a Marriage After an Affair? Part 1.

“The wound is the place where the Light enters you.” Rumi

If a marriage is a beautiful piece of glass, affairs are the immediate shattering of that glass right in front of us. Surrounded by shards of broken glass, we can’t see how those pieces will ever be put back together, leaving us feeling powerless, confused and in despair.

I actually don’t think it’s possible to put the broken pieces back together again in a marriage after an affair.

At least not in the same way they were before. The only good news here is that you actually don’t want to try to put the marriage back together as it was before. The marriage as it existed, is what likely brought you to this place of pain and wasn’t working for one or both of you.

What IS possible (I didn’t say easy…I said possible) is to pull those pieces back together and form something new from all those all those broken pieces of glass. It is possible to create a new version of your marriage together, one that represents both of your needs and who you are as a couple today – even in the aftermath of an affair.

Here’s why I know this is possible:

I’ve seen couples begin to have much more open conversations after an affair. They begin to talk to one another about the things that really matter in their lives. They acknowledge their pain and their deepest desires. Brought to their knees in either guilt or hurt, they reach for one another in new ways.

I’ve seen marriages previously on auto-pilot, taking one another for granted and living as roommates, begin to invest in new ways in the marriage after an affair.

I have even seen couples who begin having a more satisfying sex life after an affair. I believe this is because the affair has interrupted the way you’ve always engaged in sex and both of you become less reserved with one another. If you were becoming a bit bored in the bedroom previously, an affair can provide that opportunity to spice it up.

I’ve seen individuals who previously complained about their partners endlessly begin to acknowledge their own flaws and shortcomings, which ultimately made them more forgiving of one another after an affair.

They change who we are as individuals, as well as changing the relationship itself after an affair. I have seen couples become curious again about one another and who their partner has become and is becoming.

Much like the 400-year old technique of Kintsugi, the Japanese art of putting broken pottery pieces back together with gold, we can heal the scars within our relationship and create something even more unique, beautiful and resilient than before. 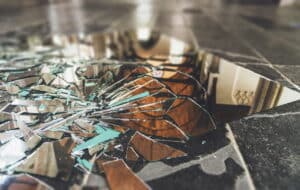