“Narcissism falls along the axis of what psychologists call personality disorders, one of a group that includes antisocial, dependent, histrionic, avoidant and borderline personalities. But by most measures, narcissism is one of the worst, if only because the narcissists themselves are so clueless.” Jeffrey Kluger

I don’t know if we have had an incredible increase in people with narcissistic tendencies or we simply have access to a lot more information about narcissism than ever before. It’s likely a little of both and that’s probably why the term gets tossed around more than is warranted.

But there’s a big difference between someone who lied or cheated and realized their mistake and a narcissist.

There’s a big difference between someone who is confident and has a healthy self-esteem and a narcissist.

There’s a big difference between someone who you think is selfish because they make their own needs a priority and a narcissist.

There’s a big difference between having some narcissistic tendencies and Narcissistic Personality Disorder (NPD).

One is annoying and usually very obvious, the other is manipulative and toxic to your soul.

Being in a relationship with a narcissist means they are completely blind to their own shortcomings and they genuinely believe the lies they’ve told themselves so they can look themselves in the mirror each day. This means whatever is wrong in the relationship is your fault, not theirs. And eventually, there’s a part of you that begins to believe it.

Being in a relationship with a narcissist means they have to hide and put up a grand facade, because deep down they know they’re not who they portray and don’t really like themselves, but you will never see those insecurities. This means you will never really know who he is and you will never be let in too far into his life or his heart. This leaves you always reaching for more and never quite grasping it.

Being in a relationship with a narcissist means getting swept off your feet, only to suddenly have the rug pulled out from under you with the cold treatment, leaving you dazed and confused, hurt and rejected. And since he cannot feel or understand your pain, it will never be validated and you’ll start to question yourself about what’s real.

I have worked with women who have been in narcissistic relationships, but didn’t know it. They typically are able to find some comfort in the knowledge that they’re not crazy after all, as they might have been led to believe.

I have worked with women who said their ex was a narcissist, but he wasn’t. These women were genuinely hurting after a man they loved left them, lied to them or cheated on them and their pain was also valid and very real. They needed to heal the hurt that was caused so they didn’t carry that with them into future relationships, but that didn’t make their ex a narcissist. It might have just been a bad choice she made from a hurting place, and that can be healed.

And I have worked with women who are genuinely attempting to recover and move on after a relationship with a true narcissist, and their journey is a long one: 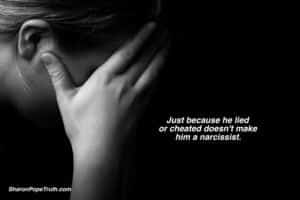