Is It Possible to Heal a Marriage After an Affair? Part 3

Both perspectives matter: “What it did to me and what it meant for you.” Esther Perel

Some of the best human beings I’ve ever known have had an affair.

It goes against everything we’re taught…

If you have an affair, you’re automatically the “bad guy,” or the villain in this story.

And we know that is not true.

I know plenty of people who have never cheated on their spouse, but cheat on their taxes, neglect their kids, drink to excess in order to numb the emotional pain in their lives, verbally abuse their spouses, emotionally abuse everyone around them…and feel no guilt nor do they have any intention of changing. The narcissists that cannot feel empathy or even acknowledge your pain, never take accountability for their own actions. The users who purposely find someone that is willing to over-give so that they can over-take. Some of those people are good people (but they’re hurting…). And some of those people have the character of a snake.

I have coached A LOT of women who have had an affair themselves.

They know they’re safe with me and they won’t be judged.

These women are not exactly on sites like Ashley-Madison trolling for random people to shag (as the British would say). Those people don’t reach out for help from a relationship coach because they’re not confused about what it is they’re doing. It’s very intentional.

The people who find me didn’t go out looking for an affair.

They never thought they would find themselves in this situation.

And they certainly didn’t want to hurt their spouse or family.

It doesn’t align with the personal values they carry.

And yet what they’ve done has the potential to cause a great deal of pain (to themselves and to others).

These women are amazing mothers.

They are open-hearted women who feel deeply and love deeply.

These women have been walking through the desert thirsty and starving for more than a decade and someone comes along and offers them food and water. And they walked towards it.

Good and bad is just a subjective judgment that each of us has created in our minds.

Matters of the heart are not so cut and dry. Affairs are not as straightforward as they appear to be and anytime we start labeling people with broad brushstrokes, we lose the ability to understand them and see the nuances that create who they truly are.

If you’re struggling in your marriage after an affair – yours or your spouse’s affair – and trying to make sense of it and find your way through it. I’ve got you. I get you. I see you. 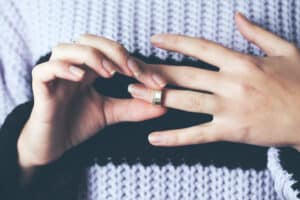