I Didn’t Go Looking for an Affair

“If you don’t receive love from the ones that are meant to love you, you will never stop looking for it.” Robert Goolrick

“I never intended for this to happen.”

“I never saw this coming.”

“I didn’t go looking for an affair.”

“We were just talking as friends.”

Sure there are some people that actively go looking for an affair – the next distraction, the next victim, spending hours on sites like Ashley-Madison. But those aren’t typically the people that find their way to me.

because they know it’s hurtful…

they know it’s just creating more confusion within themselves…

they know it’s dangerous, but much like a drug…it can be addictive.

And truly, they didn’t go looking for an affair.

They were talking. They were friends. It was harmless.

But there is a moment in that harmless banter that matters.

And that is when we begin sharing details about our marriages with this friend.

The moment of truth is when we begin telling this friend how unhappy we are in the marriage and all that’s not working.

When we do that, we’ve now invited them into a place where they don’t belong. We’ve opened the door to an intimate part of our lives that should only exist between ourselves and our spouses.

That’s the moment of the first betrayal.

And it truly is a slippery-slope from there. The friend begins confiding in us. They understand us and we finally feel seen, heard and valued. And that connection, that closeness that gets formed is what becomes the drug that’s difficult to detox from.

If that moment presents itself to you – where you could choose to share the struggles of your marriage with someone else – that’s the moment that will influence all that happens next.

Imagine what would happen next if you went home that night and shared the experience with your spouse: “I have something I need to share with you. I was talking to a friend tonight and I was feeling understood. I was feeling vulnerable. And it scared me. It showed me really how far disconnected we have become. Nothing happened between us of course, but it showed me that if we don’t fix the problems in our marriage now, they’re only going to get worse. I don’t want that for us.”

There might be fear or hurt initially, but there’s also honesty and openness. And from that place, shifts can occur within and between you. 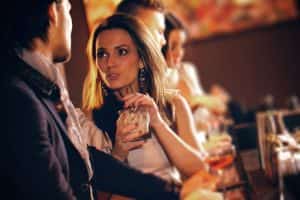 Posted in: Stuck in Indecision: Stay or Go? | Tagged with: affair, emotional affair, Facebook affair, high school sweetheart, I cheated, im not a cheater, infidelity, life coach, life coaching, love, love coach, My husband cheated, my marriage is in trouble, my marriage is over, separation, should we divorce, stay or go