“You know truth by the way it feels.” India Arie

Last night I was having a session with a client that I’ve been working with and know well. She had been married for 30 years when her husband told her it was over. She had endured decades of emotional abuse and manipulation inside of that marriage. He made her believe that his unhappiness was her fault.

She would ask, “How was your day?” and he would say, “Stop being so controlling and trying to get inside my head.”

On a vacation to Cancun with friends, he kept himself intoxicated while telling her she’s “out of control.”

She would want to understand why he didn’t want to spend time with the family more and he would tell her, “You’re such a tortured soul that it makes it hard to be around you.”

After decades of hearing these sorts of remarks, some of it sunk in.

Some of it she began to believe might be true.

Some of it made her question herself and her sanity.

Since the divorce, he’s moved on, found a new girlfriend and they’re building a house together.

She was feeling stuck in the past with her fearful mind telling her that this new woman is able to make him happy in ways that I clearly could not.

I love diving into the deep end and swimming around in the soul work that creates meaningful change; so in we went.

Think of a time when someone you know, maybe a friend of a co-worker, gave you some feedback about how you could have handled a situation differently or how you could improve in some way. You can receive that because you know there’s some truth there.

His story…about how he’s actually incredibly controlling but doesn’t like that part of himself.

His story…about how he feels out of control, but would rather turn that spotlight on you than on himself.

His story…about how he feels like a tortured soul who knows he’s difficult to be around, but doesn’t have the courage to look within and heal himself.

When someone gives you feedback, if you check in with your body – right then and there – you know if there’s some truth there or not. Truth literally feels different in our bodies.

You know if this is something you should pay attention to for yourself or if they’re simply telling you their story, projecting onto you all the things they cannot own for themselves.

If someone’s been telling you their story, you don’t have to pick it up, put it in your backpack and carry it with you for the rest of your life.

You don’t have to take it on, question yourself, and allow it to keep you stuck.

You can just recognize it as their story, and let it just lie there.

Because you know the truth of who you are.

You know…because you can feel it.

Here’s a snippet of what this brave and beautiful client had to say about our work together:

“I entered this working relationship with some doubt and a little cynicism. I have done therapy over the years and again more recently after experiencing the loss of my 30 year relationship with my husband. My work with Sharon has been unlike any other. The focus is different. There is a depth to our work – that gets to the core of who I am and what I want going forward. Sharon takes a caring, compassionate approach, tempered with accountability and honesty – she calls “bullshit” when it needs to be called and asks questions I have never been asked before, triggering thoughts and insights that I have not experienced previously.” 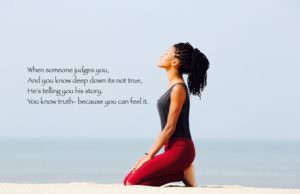