The Mature Marriage: Five Signs of a Marriage in Trouble

The Mature Marriage: Five Signs of a Marriage in Trouble

“And once the storm is over, you won’t remember how you made it through, how you managed to survive. You won’t even be sure whether the storm is really over. But one thing is certain. When you come out of the storm, you won’t be the same person who walked in. That’s what this storm’s all about.” Haruki Murakami

Even though divorce rates for younger couples is on the decline, the rate of divorces in mature marriages is increasing. As a matter of fact, the divorce rate has nearly doubled for couples age 50 and over throughout the past 25 years according to Pew Research and U.S. Census Bureau data. Additionally, a study by the American Association of Retired People suggest that two-thirds of the time it is the women in this age category asking for the divorce.

Of course, every marriage struggles occasionally and certainly there are some marriages that have seen more than their fair share of troubles. But the struggles in a marriage when you’re a few years into the relationship look and feel very different than the struggles after spending a few decades together:

When your mature marriage isn’t feeling as good as it used to and you’re trying to determine if it’s a marriage in trouble or a simple struggle that will soon pass, here’s how you can know the difference:

I Love Him, but I’m Not in Love with Him. This is a common phrase that is used after being together for a long time, but there’s some truth to it. We can have love for someone and genuinely care about their well-being without being in love with them. And the definition of being in love doesn’t have to look like it did when we were young and got butterflies every time we looked in one another’s direction. Being in love is an important aspect of remaining in a happy marriage – not out of obligation, but because there is no one else we would choose to walk beside in this life.

We’re Roommates. When we feel like we’re living together as roommates – keeping one another company, but not actively engaged in creating and sustaining the relationship – the marriage is in trouble. Our relationships are like any other living, breathing thing: it needs attention and nurturing in order to grow and thrive. Too often, we place our marriages on auto-pilot assuming it will take care of itself, but then over the years we disconnect from one another and feel like roommates, or worse – strangers.

We Want Different Things. Most of us don’t want the same things at around the age of 50 that we did when we were 25 years old. And as those dreams and desires change over time, sometimes two people grow into wanting very different things in the second half of their lives than in the first half of their lives together.

I had a client who retired from the financial industry and ready for her next adventure, opened a gym, lost 20 pounds and became a personal trainer. Her husband, however, was ready to slow down, move to the country, buy some land and have the grandkids come and visit occasionally while they watched time pass in their rocking chairs on the front porch. Neither is wrong and both of their desires are equally valid, but what each wanted now in this second half of their lives was very different than what the other wanted.

A client I worked with knew her husband was an attractive man; after all, lots of people had told her so. But, she wasn’t attracted or drawn to him at all. It wasn’t about his looks, it was about a lack of closeness, intimacy and chemistry that was no longer there between them.

Living Separate Lives. Maybe years ago, we unknowingly began building separate lives from one another in order to divide and conquer with kids, careers, home, family, and other obligations. Out of necessity, we began creating and living separate lives from one another and focused on the kids and what they needed. We stopped doing things together that and now the distance seems insurmountable.

Maintaining a healthy, thriving relationship over the course of several decades is not for the faint of heart. We enter into marriage with little experience, no training and very few tools to help us navigate the relationship when difficulties, disagreements and struggles arise. Almost everyone finds their marriage in a slump occasionally. It’s helpful to understand if that slump is simply a moment in time or if it’s a marriage in trouble so that you can take the necessary steps before the distance between you becomes too wide to cross. 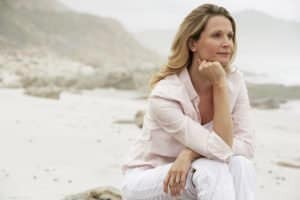