One Conversation Created A Miracle For One Couple

“Just when you think you haven’t got anything left, take a deep breath and take one more step. It could be the one thing that changes everything.” – Rachael Bermingham

Sometimes my clients surprise the hell out of me.

This one particular client had been waiting for years to leave her marriage. She had tried everything she knew to try to make it work.

And what she was asking for was in my opinion, the bare minimum to be in close relationship with someone.

She was very clear that she wasn’t going to do anything until her only daughter went off to college. And in the meantime, she wanted to get equipped.

One month ago, she and her husband of 30+ years dropped her daughter off at college about two hours away. They drove home in silence and spent the weekend keeping themselves busy around the house, working and running errands and making small talk with one another over dinner. It was awkward.

That Sunday night, she finally had the conversation where she told her husband about her decision to leave. For her, the marriage was over.

The conversation wasn’t hateful and even as he began to process this news, she held firm to her decision.

They had made plans to go see family as state away over a long weekend and she agreed that she would go with him. She expected it to be just as awkward as it had been since she had shared her decision to leave the marriage, but she knew how to navigate awkward by now.

As they’re sitting shoulder-to-shoulder, riding alongside one another for 5 hours, the conversation changes. Now instead of either threats or desperation (which had previously been delivered face-to-face), he begins opening up and expressing his heart to her.

He softens.
He shows sincerity.
He apologizes.
He acknowledges her perspective.
He said he wants to be a better man and a better husband and told her how he plans to create that.

She felt like they were finally able to express things to one another sitting shoulder-to-shoulder that they had never been able to previously face-to-face.

She came back from that weekend and surprised the hell out of me. She said things like:

We finally began laughing again.
I’ve made a complete 180 on my decision; it feels really good again.
I’ve literally never felt like this about him before.
He’s genuinely taking the effort to make the very necessary changes – for himself and our marriage.
I feel loved in a way I never have before (AND our sex is amazing!).

Sometimes we can get flustered or want to run away when we’re standing and looking directly at someone.

But if there’s a hard conversation to be had, maybe shoulder-to-shoulder is the better approach.

This client felt like that made all the difference for them.

Like I said, sometimes my clients surprise the hell out of me.

She was so decided that she was going to leave the marriage and I supported her in that decision.

And I celebrate every single one of them.

Next week, I’ll be hosting a live webinar entitled, My Marriage is Falling Apart: How Did We Get Here and What Can I Do? If you’re struggling in your marriage, I hope you’ll join me. Here’s where you can find out register for the limited spots available. 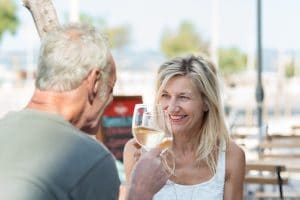