My Affair is Over. Now What?

“I don’t know why we all hang onto something we know we’d be better off letting go of. It’s like we’re scared to lose what we don’t even really have. Some of us say we’d rather have something than absolutely nothing, but the truth is, to have it halfway is harder than not having it at all.” Meredith Grey, Grey’s Anatomy

Maggie reached out to me in tears, trying to overcome the loss of a relationship with a man that she deeply loved. She shared with me that she had never felt so connected to someone and now she feared she would never have that feeling with anyone again.

That man wasn’t her husband.

That man was actually the polar opposite of her husband; he was everything her husband was not.

That man was someone she had known a long time ago that started as reunited friends and turned into lovers and a long-term affair.

But now that affair is over.

He’s decided to go back to his wife and really try to make it work.

And even though it’s killing her, she understands his decision and would like to think she could attempt to do the same in her own marriage, but she’s not sure she can.

Maggie had long known that something was missing in her 23-year marriage, but she didn’t know exactly what it was. She just knew that she felt lonely and isolated, not really understood or desired. But maybe that’s just how marriages are after 23 years…

The problem is that now, as a result of her experience with this other man, she knew what was missing in her marriage.

And once you have that experience and you know what that feels like, you can’t un-know it.

That feeling of being able to be completely yourself…

That passion and desire that has been brought to the surface that you’ve never felt before (…and are afraid of never feeling again).

She doesn’t know how to live without that now. And that’s just not the type of relationship she and her husband have ever had. So she’s grieving the loss of a relationship with another man while coming home every evening to her marriage. She doesn’t have anyone to talk to, her husband doesn’t even notice that anything is wrong, but her stomach is in knots and she’s not eating or sleeping much.

Her affair is over, so now what?

She can’t seem to simply dive back into her marriage, because clearly that was broken a long time ago…otherwise, she never would have given her heart to another man in the first place.

She can’t have the other man because he’s made the decision to end their relationship.

And because she ties those desires she now has to the other man, she doesn’t believe she could ever have that kind of relationship with anyone else. So she feels stuck.

Maggie is trying to convince herself to learn to live without an intimate connection to another soul, to forget what she now knows and wants and needs and desires for herself. But that’s not really possible and fortunately, that’s not the only option.

Here’s what she has to do:

Maggie can have the kind of relationships she desires for herself.

She can take what she’s learned about herself, what she wants and needs as a result of this affair and build upon it.

She can create both a passionate and peaceful life for herself, but she has to create it….for herself and through herself…but not necessarily by herself. 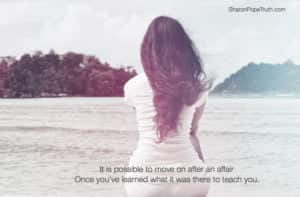