The Pain in Relationships is Circular

We all have pain in relationships. And many times, the arguments that result from that pain are circular.

“I have found the paradox that if you love until it hurts there can be no more hurt, only more love.” Mother Theresa

Let me see if I can do this story justice….

Renee and Pete love one another; truly. And they both sincerely want to make their relationship work.

Some days she can’t imagine ever spending her life with anyone else. There is great chemistry. There is a comfort between them. She says she’s never loved anyone the way she loves Pete.

But they fight…often. And that fighting gets old.

He tries to tell her what to do and she feels controlled.

He makes big deals out of little things.

When they don’t agree, she would prefer to discuss things; his natural reaction is to argue.

He’s genuinely trying to change and although she appreciates that, there’s enough red flags there to give her pause about if they can make this work forever.

How We Get Here

When Renee left her marriage last year to a nice guy, it raised eyebrows and caused a lot of pain.

For that reason, she’s not exactly posting all the pics of her and Pete on Facebook. She’s not inviting him to her daughter’s soccer games. When she sees someone she used to know, she’s not introducing Pete as her boyfriend.

And when things feel outside of your control, what do we do? We try to control them.

And when Renee feels controlled, she does what most of us would do: get angry, fight back, and carry resentment about it.

It’s a bit confusing, I know, but stay with me here because this is where the details matter….

We carry a wound or a hurt from some past experience that’s never been dealt with.

We carry the pain from that wound into our next relationship and it impacts our choices and behaviors in that relationship.

And because we don’t ever talk about the wound – the root cause of the issue – it not only doesn’t heal, but it festers like a cancer and we allow it to unintentionally sabotage our relationships.

And we don’t even realize we’re doing it.

You see, Renee wants him to understand her perspective.

Pete wants her to claim their relationship and commit to them as a couple.

But you know what they argue about most?

You know what they don’t talk about?

And because the root cause of all of it is never talked about, they (and we, in our own relationships) spin around in circles arguing about the symptoms. It’s like having a broken leg and taking a pain pill for it; it seems like the right thing to do to stop the pain, but nothing ever really gets fixed.

Healing the Pain in Relationships

We all carry pain in relationships. We all carry wounds that we haven’t healed and frankly, don’t even realize are there. But those wounds show up in our behaviors, unintentionally causing our partners pain. Then, because they’re hurt, they act out in the only way they know how and cause you pain…and so it goes.

We hurt each other over and over and over again, never healing the original wound. And then we’re pointing at our partners and thinking they should change.

The answer is to find that original wound within each of us, to recognize how it shows up in your relationships, and to heal it through love and acceptance. Because love is the only thing that ever heals anything important. 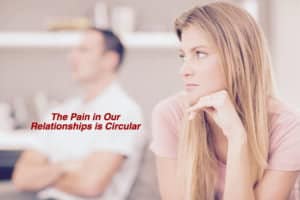