“The most important questions in life can never be answered by anyone except oneself.” John Fowles

When my first husband and I went on a boating trip with some friends, we decided to stop in a cove so everyone could jump in the water for a bit. I hopped onto a floating raft. I leaned my head back and closed my eyes behind my sunglasses while I floated on the water and lay in the sun. I’m not certain how long it was, but after a while I heard my name being called from far away and it startled me.

I hadn’t been paying attention and had floated pretty far away from the boat. And it was a long swim against the current to get back to the boat.

I think that’s sometimes what happens in our marriages.

We’re slowly floating further and further away from each other until, over time, the distance is too wide to cross.

Sometimes we grow apart and don’t know exactly when the drifting apart began.

Maybe it was after he got that promotion – by the time he got home at night, he didn’t have the energy to connect with you like he used to.

Maybe it was after you had children and the busyness of your lives and your kids’ needs took precedence.

Maybe it was when you realized that it had been months since you’d touched or kissed or said, “I love you.”

Even when there’s something as heart-jarring as betrayal, lying, or cheating, the drifting between you likely began long before that event ever took place. 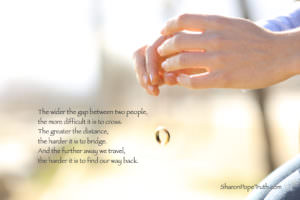 Posted in: How to Fix My Marriage | Tagged with: broken heart, divorce, it’s over, life coach, life coaching, love coach, marriage, my marriage is over, preparing for divorce, relationship, separation