The Power of the Pause (When Your Spouse Irritates You)

My client did an extraordinary thing a couple of weeks ago.

I referred to it as The Power of The Pause.

What she did was so simple but it completely changed the trajectory of an evening with her husband.

She and her husband had just finished dinner together and he headed for the family room to watch TV. He watches TV every night and she hates watching TV, finding it mindless and boring.

He says to her: “Come watch TV with me.” As she hesitated, he added, “What’s wrong with you? You never want to watch TV with me anymore. It’s like you’d rather spend time alone than with me.”

Her first reaction was one of judgment which would have sounded something like: “I don’t want to watch TV because I think it’s boring and mindless. And frankly, I can’t believe I’m married to someone who wants to spend their time that way.” Then she would have gone up to the bedroom as she usually does to read a book or take a bath.

But she didn’t say or do any of that…

Instead, she utilized The Pause.

There was a time – years ago – where she would have watched TV every single night with her husband, even though she didn’t want to. For the first 18 years of their marriage together, she would always acquiesce to whatever he wanted and would never consider her own needs, especially if she thought it might hurt his feelings or make him angry.

But she didn’t get fearful that she would hurt him or that he would get mad.

Instead, she leveraged the power of The Pause.

She stood there for probably a full 60 seconds…

Thought about what it was she really wanted to do…

She noticed the fear she used to have about his reaction or interpretation was completely non-existent.

Thought about how her snarky remark would probably lead to an argument and her sleeping alone and him on the couch.

She took a breath and got clear…

And she said: “You know TV just isn’t my thing, darling, but I would like to spend some time with you this evening. So how about I grab the magazine I got today, grab each of us a glass of wine, and meet you in the family room, while you light a fire for us?”

By taking a brief pause to get clear about what she wanted and what outcome she would prefer for herself, she was able to have a nice evening and do something that felt good to her.

It sounds so simple.

That’s The Power of The Pause.

Sure, she could have been snarky and judgmental…that’s easy, but a cheap shot and not who she wanted to be.

And she could have done what her husband wanted her to do…it’s only TV, but that felt like a lie.

Instead, she rested in her own power. Got clear and turned what could have been a point of further disconnection into an opportunity for understanding, acceptance, and a peaceful evening together.

Take some time to find your own power in the pause this week. 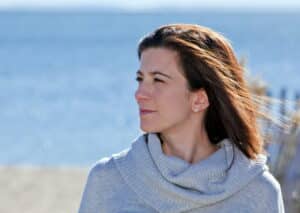