What Are We Arguing About?

“Only one thing is more frightening than speaking your truth, and that is not speaking.” – Naomi Wolf

One of my clients came downstairs and picked a fight with her husband about how messy the kitchen was while he was cooking dinner. “Can’t you ever just cook a meal and not make the kitchen look like a tornado came through here?”

He felt unappreciated (since he was cooking dinner after all) and the arguing ensued. Everyone in the family took their dinners to different corners of the house to eat in peace. No one spoke for the rest of the evening, each feeling like they had been wronged in some way. She slept in the bed; her husband slept on the couch that night.

She and I spoke the next day and when she told me about the argument, I knew there was much more to this story than she was telling me.

She didn’t really care about the mess in the kitchen.

Her reaction was a result of how she was feeling….

And she had been feeling frustrated, sad, and silenced. She had a lot she had wanted to say to her husband about the state of their relationship over the last several weeks, but it’s all gone unexpressed.

And truth be told, she was scared to speak what was true for her…knowing it could have huge ramifications.

This is often what happens when what needs to be said goes unexpressed. The frustration of carrying that truth within ourselves, but not being able to express it causes us to begin arguing about things that aren’t the core issue. This is because when we’re arguing – regardless of what it’s about – it’s like a release value on a pressure cooker. There is some relief there…

But it ultimately feels pretty unsatisfying.

It’s never about the messy kitchen…
It’s always about what you WANT to express but haven’t been able to yet.

Much like how you can hold a beach ball underwater for some period of time…eventually, you’re going to let go of it and that’s when it will suddenly come to the surface – usually with some force.

Ready to get at the root of what’s really going on inside your marriage?
Are you ready to understand the truth that needs to be expressed?
Ready to learn how to have those difficult conversations and move through the outcome?

If so, I’m here and ready to help. 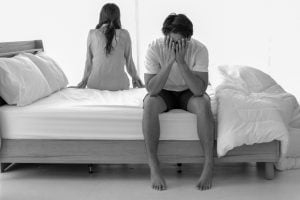