Why Your Wife Gets Frustrated and You Shut Down

When an issue comes up in the marriage that needs to be discussed, Mark likes to think about it. He likes to work it through in is head before he even mentions it to his wife. If she brings something up first, he ends up feeling blind sighted and like he “must” have an answer or resolution right there on the spot. Any time he has tried to step away from the discussion or end it, he and his wife end up in a big argument. His wife gets frustrated and he shuts down.

His wife processes things very differently. When there’s an issue in the marriage, she wants to be able to talk it through with him in order to come to a resolution. Her frustration is that she feels like he shuts down, won’t talk to her about the issue and then believes he doesn’t care. She keeps trying to talk and make her point and get him to listen, and he ends up shutting her out and has little to say.

The more she talks about it, the more he feels trapped and like he has to find the “right” answer. He feels like he can’t come to a clear resolution that quickly and just wants some time to think about everything she has said. Sometimes he just agrees with her to end the conversation even though his true feelings and needs are not being expressed. Sometimes he tries to stay and stick it out and have a conversation he is not ready to have and it ends with both of them repeating themselves, raising their voices, and walking away. His wife gets frustrated and he shuts down. It gets stuffed down until the next time and the cycle repeats.

The resentment from not talking about it and arguing about the same unresolved issues over and over again has built up over the years for both of them and now they are totally disconnected from each other.

But what if this is a misunderstanding?

What if they just process information differently?

What if there was a different way to approach it so that he could get the result he wants – which is resolution, and to not feel like he can’t get it right?

Here is the truth. Men and women process information differently.

Women tend to work through the issues they have by talking about them. The talking it through is actually where the processing and clarity occurs. This is not only a learned and cultivated skill for women, it’s also how the female brain works. We have many connections between the left and right hemispheres of the brain, allowing us to talk about and process many thoughts and emotions simultaneously.

Your wife is not trying to badger you or force you to listen. She is not intentionally trying to escalate the talk when you don’t respond. It is simply a matter of how she processes the issues.

Yes, you can choose to talk it through and that can be done, but it may not come as easily, especially if the issue is more emotionally demanding.

Lots of women become frustrated because their husbands won’t talk through things with them in the moment– and then make the assumption that he just doesn’t care.

That isn’t true.  That’s just the difference in how we processes information.

That doesn’t mean that we can’t resolve the issue, it just means we come to the resolution through different paths. When we can allow each other to process the information in the way that suits each of us in the relationship, then we can get resolution and not feel so frustrated. It does not matter how we get there, just that we get there.

You can fight it and insist that women process information the same way you do, (and your wife gets frustrated) or you could just acknowledge the difference and work with it (rather than against it). Why not try a different approach. Explain what you need and ask for what you want.

Tell your wife it is important to you and you just need some time to think about it and process it. Tell her you want to talk about, that it is important to you (if it is) and set up a time to come back to it. Just make sure that you come back to that discussion as you said you would. This way, she feels heard and like you care about the issue too. It also gets you the time you need to process the information and show up the way you really want to when you have the conversation.

Think of it like this: You can drive from Columbus, OH to Atlanta, GA. You can get there in about 9-10 hours if you drive directly south. Or, you could drive through Arizona to Atlanta and it would take days. Both get you to Atlanta….one is shorter and far less painful. 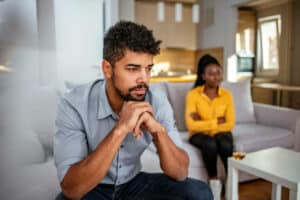